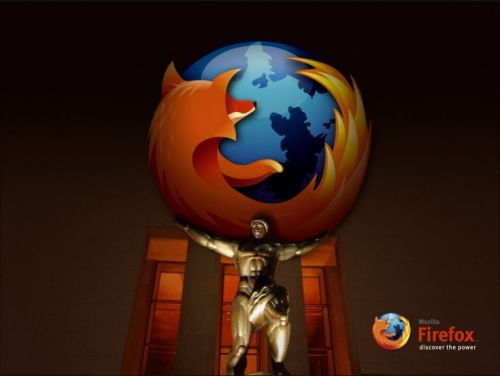 Firefox is a well-known Web browser, but one of its flaws, it is at the level of its memory consumption. More you leave open Firefox (even idle), will consume more memory… In a few minutes, Firefox may use 100,000 K of memory or even 200,000 K. This defect is known for a long time (not to say since its inception, but in any case, I am aware of this problem since Firefox version 3… ) Although this is a known issue, I never really did research on this more so at a time, Mozilla announced having reduced this memory leak, so I did not pay attention and the 200,000 K memory which sometimes reached the 800,000 K seemed to be normal although knowing that huge. For the memory consumption in Firefox, it's simple:

Recently, I decided to floor me on the problem and test software that I knew for a long time and who was supposed to/is supposed to reduce this consumption of memory by Firefox, the Firemin program, which is known as being the plumber of Firefox. And after my memories, there are others, but everything software optimization, I am suspicious as the Ebola plague, they generally worse than better! I decided to test Firemin because he announced to start color:

The Firemin method uses to decrease Firefox memory usage is not proven and the debate over if it works or not will go on until the end of time, but the logic remains; If it works for you, use it and if it does not, don't use it. It is really that simple.

Which translated in french means:

The method that Firemin uses to reduce the use of memory by Firefox is not proven and the debate on whether this works or not will continue until the end of time, but the logic remains; If it works for you, use it and if that doesn't work, do not use. It's as simple as that.

In short, he does not promise mount and wonders! And that's what attracted me, because the software of this kind rarely keep their promises and in the end, we are disappointed! While here, it's a bit like a gift of Christmas under the tree: where we are happy with the gift and we'll use it / keep it, where you're not not and byebye! I so test Firemin with Firefox version 33 and 34, on Windows Vista 32 bit and 64 bit Seven.   Result? Usual memory usage to minimum 200,000 K, with Firemin, Firefox doesn't use now more than average about 2,000 k, i.e. 100 x less! For use in personal memory for Firemin about 800 k! In short, thanks to firemin, it's all profit because the computer will be able to recover all the resources that Firefox was eating to increase your PC's performance! Besides, you just close Firemin to notice that Firefox takes up very quickly to the weight!   At the level of the setting, nothing complicated. It is a portable software, so no need to install, just unpack it. Personally, I left the default settings at 300, I just checked the box "Start Firemin when windows starts" (start Firemin when windows starts) because I have firefox which is launched also in Windows startup. 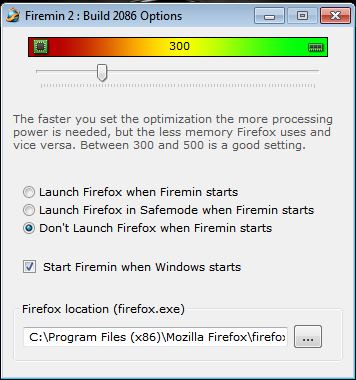 At the level of the options, the most important thing is the optimization rate which is controlled by a slider. The value is small (redshift), less Firefox will consume memory, but more processor (CPU) will be sought. Conversely, the value is large (to the green), less the CPU will be sought, but more Firefox will consume RAM. The author recommends that you setup between 300 and 500. Oh, and check out though the Firefox file location is correct, otherwise it won't work! ;-)   Firemin download link: http://www.rizonesoft.com/firemin/ and to optimize your Firefox and make it even faster, I recommend Speedyfox! ;-)

How to optimize Firefox, Thunderbird, Chrome and Skype with a single software

How to optimize its processor: change and enable L2 and L3 of its CPU caches