Creality 3D is a brand recognised manufacturer of 3D printer, she managed to become known internationally and have an excellent reputation in only a few months. One of their flagship model was the CR-10 (and variants), and for a few months now, it's model Ender 3 which is in full expansion. 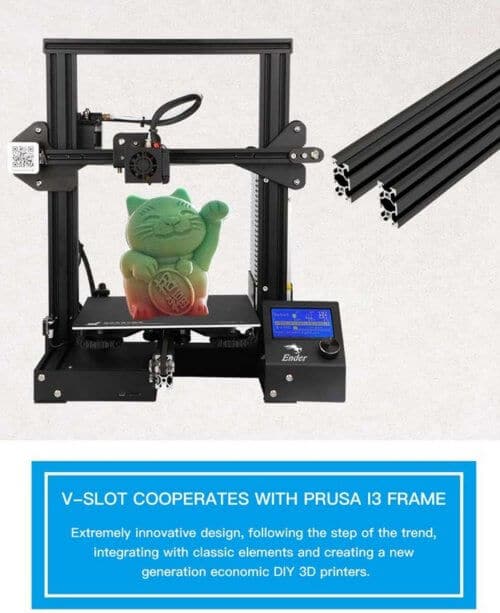 I must say that when we compare, Ender 3A indeed what Stoke lusts! In normal price, it is about 200 euros, which is already a pretty low price for a 3D printer with structure (read here the test of another printer 3D aluminum) aluminum and volume of 250 x 220 x 220 mm print! It is not rare to find this kind of 3D printer at skeleton aluminum to 300 euros for a print volume lower, usually of 200 x 200 x 200 mm, and without the Ender 3 functions! In addition to the structure in aluminium, the Creality 3D Ender 3 has also other advantages: control box incorporated into the structure, V-slot, resumption of printing in case of power failure, warming tray, printing of flexible filament ease, etc…   In short, it is normal as the Creality Ender 3 or more popular, but when you have promos as in this moment at Gearbest, or she is 159,12 euros with the GBEnder3 code to insert on your purchase, instead of 208,62 euros then go for it if you wish to have a 3d printer aluminium at low price! Namely at this price there, it's barely more than a "normal" acrylic 3D printer that is much less stable than a printer aluminum!