For people who often stay behind a computer like professional players, the brightness of the screens is problematic. You have several solutions to this: film on screen, software filter like F. Lux, or even special glasses. I have never tested the first solution yet, but I have approved the 2nd of the solutions and this time I will test one of the 3rd solution. The glasses, the noscope Demon glasses, which I will test are those of the brand Noscope that the brand kindly wanted to send me from the United States. 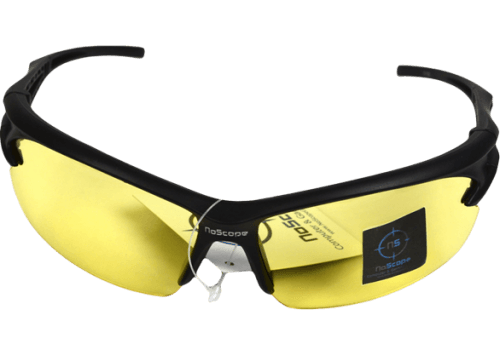 These plastic eyeglasses, are composed of glasses tinted in yellow, allowing you according to them, to reduce the eye fatigue, increase the contrast and clarity of your screens.

So what is it really?

These glasses are available in single size, personally, they went like a glove around my head, the branches would be without being too strong. At the nose level, no worries either. After a few hours, no worries. The big concern is that I saw the outline of the circles that hold the glasses! Which is quite annoying! Are these my eyes or the glasses, I do not know, but I have never had this problem before… In terms of the efficiency of the glasses, since the circles interfered me, I could not wear them more than a couple of hours, but the little that I could test, I still could notice that this one actually diminished the glare of the screen. Level of eye fatigue, contrast and clarity, no notable observation.

Personally, they did not satisfy me, but I would say that is to be tested. Why? Because everyone has a different face and different eyes and also because they are reimbursed you (30 days) if they do not suit you! These glasses, for a price of 15, 45 euros include glasses, a cleaning cloth and a transport case of very good quality that looks like leather! These big flaws are for me the fact of seeing the circles of the mounts and the fact that it is dedicated to people who do not wear glasses correction of views. But they are still 5 times cheaper than the competition (like the Gunnar) (for the same efficiency?), comfortable, cleaning cloth and carrying case included, and the whole thing is refunded if not satisfied! In short, to test if the envy tells you. Link: