Today, even for a nature lovers or adventurous vacationer, the technology is everywhere with us and therefore needs battery to various devices continues to grow with always more powerful, efficient but also greedy devices in energy! Although my phone takes a few days, if we take for example an iPhone, a daily charge is often necessary. What one problem size for all people wishing to have a phone, a camera, an mp3 player or other still in working condition. Here comes the Scosche solBAT II solar charger. 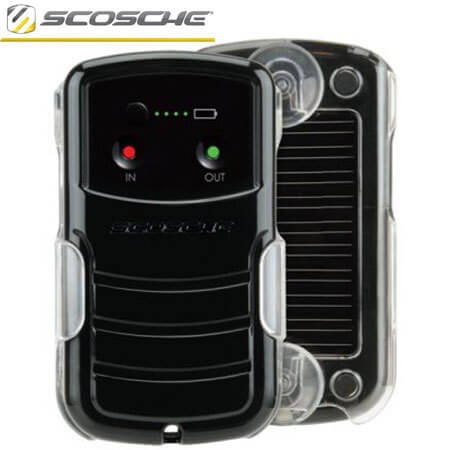 This small device, no bigger than a mobile phone (and smaller than many current smartphone which have more screens bigger), is very light and easy to carry anywhere. Its price of less than 30 euros also makes an asset for this type of products that often at this price, are not very efficient, being more the gadget to the real useful object. But then, I must say that I had a pleasant surprise!

Indeed, even if the only solar charging time is highly variable depending on weather conditions, the angle of exposure, the lux of light power (because it also loads under a lamp inside, it is just much slower) and other settings, in my home, by the current sunshine who starts to continue finally this year, down sitting on my terrace in the Sun and with the Panel in the direction of the Sun , the afternoon was sufficient to charge about 80% I think. Namely that at 100%, the load device I think, all phones of the moment, at least once. And surely several times for an mp3 or other less greedy device in energy and therefore with less powerful battery.
While there, the test made at home, with so full of outlet within reach and a good exposure which remains fixed, it is not really the actual conditions of use, but it still gives an idea. 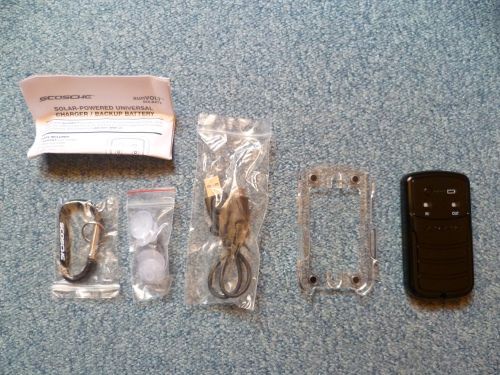 There are several way to load and multiple accessories supplied with to load more efficiently.

First of all, the load forecast home to go on holiday, hiking or other can be done by USB port directly on the computer. must be account 2-3 hours for a full charge. For the solar recharging, place it somewhere is well… but not practice hiking. There is in the box of this solar charger a small carabiner, which allows to attach it to its garment, belt, backpack. I think that attach to a backpack to clamp it into place so that the solar panel is always in the direction of the Sun without the charger can be returned or rotated on it even is the optimal use. After hiking it is rarely in a dessert in walking back to the Sun. It crosses the forest of buildings and any other source of shade and the Sun which is not always behind us. Charging time in these cases there is surely much more important. But sufficient for a non-abusive use of its material… After all, is not a hiking for spending his day on facebook ;-).
If you are at the beach less problem because it remains stationary.
We have in the box also a hull, as well as 2 sets of suction cups to attach this solar charger on a windshield of car or any other surface lise there range as for example, a sign near a table of picnic, a window of a high mountain chalet or other. When I write these lines, the solar charger is always hung at my window (since yesterday) and it is not yet fallen. 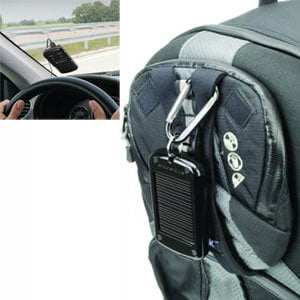 Another important criterion, it is ease of use and being able to know the level of charging the appliance without so far drained the battery by displaying the battery level. The device has 1 button and 6 LED (what's easiest). There are 4 LEDs which are for the display of the level of load, so by 25%, but to save energy they are extinct, it is that serves as the button, it will display a few seconds the charge level, thus allowing to not waste the energy of the battery!

There are two other LEDs, a green "OUT" and a "IN" red, indicating respectively if a device is to load and if the surrounding light is sufficient to start the battery charge. Battery, which by the way, despite the small size of the device is just the same 1500mAh.

In conclusion, I would say that this solar charger has a good value for money, and allows you to troubleshoot when there is no socket at hand for several days. Combining a load completed via USB before you leave, and then by loading its equipment while continuing the continuous load from the solar battery. He troubleshoots what it takes but will not be enough if you want to use intensely your high tech, especially if there are several consuming.