You think not necessarily seen that for most people, using a keyboard normal, basic, just like mouse. But in the world of video games, you mouse dedicated to gaming, but also of the keyboards dedicated to video games. What do they bring in more than the classic versions? Like gamers mice, you have the design, the speed and the new buttons in addition. But one of the most important things in my eyes is anti-ghosting! Besides, it's simple, for my part, I think that a keyboard that does not have the anti-ghosting function is simply a keyboard for player! So first of all, for those who ignore it, what is ghosting? Ghosting occurs when you press multiple keys simultaneously and instead of having all the keys pressed respond, you will have some that will simply not react as if it had not been pressed (hence the term ghosting for ghost, Which in French means phantom) or you even have an adverse effect that may appear, that is, that another key responds when it has not been pressed! There are 3 reasons for this: keyboard architecture in itself, software and the USB/PS2 interface. To check whether or not your keyboard supports the anti-ghosting, it's pretty simple, open a text editor and hold left CTRL and Shift right (the shift keys are the arrow keys has upwards from each side of your keyboard) and while now the 2 keys, press the Z button. If your keyboard has function anti-ghosting, the Z will appear, otherwise, it is that you do not have anti-ghosting. Attention that the anti-ghosting is defined in number of keys supported and not on the entire keyboard. That is why when you buy a gaming keyboard, it is important to know the number of touch that have anti-ghosting and what are the affected keys. At stake, the most used keys are Z, Q, S, D and the directional arrows. If these don't have anti-ghosting, it's not a keyboard for gamers! These keys are the minimal union! T 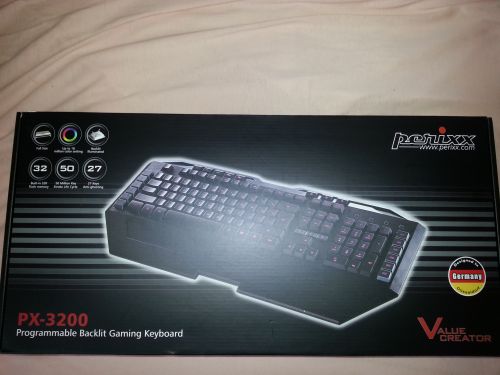 The first thing to say is that it is a great keyboard: 52.1 cm long and 22.7 cm wide for 3.7 cm thick. At the design level, I find it very beautiful, very classy, especially when this one is illuminated! Unfortunately, the keyboard is plastic and features at this level, 2 faults: it keeps the fingerprints and the claws appear quickly enough and quickly spoil the design… At the level of the rear panel, this keyboard has 5 non-slip pads, 2 on each side and 1 on the bottom. It is a great idea for those who do not use their keyboard at the zero level, but inclined. But the best of the best would have been to add an additional pad on the top! Too bad. The USB cable is fairly rigid, although it is not supposed to much be manipulated, a somewhat more flexible cable would be also desirable. Although shown and non-editable, the keyboard lights go off when not used. A simple pressure on the wrist rest to relight the diodes.

Keyboard, relatively quiet and pleasant to use, includes additional keys from an ordinary keyboard:

ussing it with Perixx, they reminded me that the French QWERTY is different from the Belgian QWERTY, which is quite accurate, or being Belgian, I have always been accustomed to the Belgian QWERTY and unfortunately, they do not yet have a QWERTY keyboard Belgium. Normally, this problem can be solved for the Belgians by changing the language Windows-level, putting thus Azerty France instead of Azerty Belgium. After that, all you have to do is not to type the letters blind by habit! ;-) Otherwise, you have 8 additional reserve keys: Z, Q, S, D and the 4 directional arrows, in short the keys that are most used in play and that are likely to have a problem.   Little bonus if you have or will have this keyboard, given that I had need, this will prevent you from going through the media, maybe will you also need to know how to test a quick macro without driver:

I must say that I was very disappointed when I noticed that the programmable keys only worked half! Fortunately the technical support of Perixx was there to solve my problem otherwise I would have skyrocketed this keyboard! Aesthetically, it is beautiful, and functionally, it had potential… but driver offer unfortunately quite few options and break the big potential that could have this keyboard… Fortunately the anti-ghosting works as well as the backlight (although it lacks some colors…) On the other One last small point, the manual is not explanatory, and the help is totally absent from the software/driver… CA it's a shame because everyone is not like me that touching everything and loves discover… Fortunately the technical support knows his job and is very responsive!   [Gallery link = "file" ids = "7289, 7290, 7291, 7292, 7294, 7295, 7296, 7297,7298"]   Product Link: Http://www.amazon.fr/gp/product/B00OP4GD1M