As you already know, I do not like the cables for sake of the reason: bulky, not attractive, they look, etc…

So I've found a gadget that allows much to differentiate it from others, a light cable! :-) The lights, it is so pretty.

If he did that of light, it would not so much interest that much. But you also know the charge level of your device in a quick look! Indeed, according to the manufacturer, once the level of charging the appliance arrives at 65% the scrolling speed in the cable slows down and once it is loaded to 100% light turns off. We will verify it all together.

(A) Aspect of the cable: 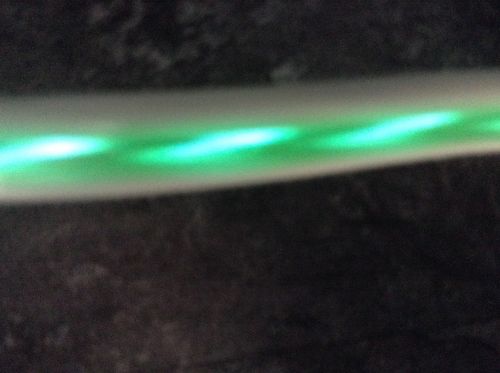 (1) the Dexim cable is 2 times thicker than a cable official Apple, which is normal because in its centre there is the play of light. But this makes it more rigid than a regular cable. This limits its use as a portable cable and making it more fragile. Therefore, to ensure always handle the cable with delicacy and do not twist it too much on himself. I read in several places that this might damage the cable, which could lead to the inactivity of the play of light.

(3) the light effect is very nice looking. We see really good the current flowing in the appliance sector. The brightness is not disturbing in a dark place. It does not too light.

(B) Résultat load and synchronization with the iPod 5th generation:

The cable is therefore equipped with a USB port with at the other end a lightning port. It is therefore compatible with the new generation of product call: Iphone 5 / 5 S/5 c as well as the new models of Ipad.
The charging time is almost identical with the 2 cables. So, we can say that the light effect doesn't bother loading the unit.

The speed of light varies actually?  Yes, but not to the level of load indicated by the manufacturer. After making several load my camera, I have observed that the speed of light decreased once a charge of 80-90% level and not 65%!  But as soon as you activate the iPod's screen, lights parade again quickly. It should therefore not touch if we want that the functionality of the cable are observed, which is absurd!

For what is the extinction of lights, once arrived at 100% charge level, this is well respected, but because there are always a but, the light only is cuts 15 to 20 min after the level of 100% is reached. And yet, if one activates the screen, cable turns him also for a few minutes.

For synchronization, there are no worries, the PC recognizes very well the cable. No worries at this level.

The constructor does not lie, the speed of light varies according to the level of charge but do any touch to the unit during the entire load.

The rigidity of the cable doesn't make it not easily transportable, because we cannot bend it like a regular cable without risking damage.

But good, design level, it does really good light. For Christmas, near the tree, it can be used as a Garland.

My rating for the product would be 14/20. For the same price we have a cable official Apple but that does not light, so why not get tired to try?

For other products compatible Apple: http://www.mobilefun.fr/10902/apple.htm