Several months ago I have this mouse and because it is almost perfect, I want to share with you my experience and tell you why I love it!

Frankly, it's a mouse for all those who are often on a computer!

Basically, I had a mouse Logitech M215 that I bought as my laptop, not liking the touch pad. It is a simple wireless, 2 buttons and a wheel, with battery and all mini mouse. 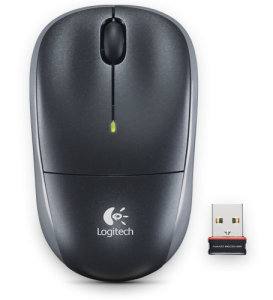 But after a while, it no longer sufficed me: is blogger and working much on computer, 2 buttons (click left and right) and the one-way dial me slowed down (I'm not too keyboard shortcuts) and prevented me from doing things quickly.

So I decided to change the mouse. I had a mouse with a max of buttons, history that I can control a maximum of functions from the mouse and that it is wireless. It was the 2 most important criteria for me!

Mice with more than 4 buttons, it is rather rare in desktop mouse, should rather look for them in the gameurs mouse! During my research, I had spotted the Logitech Performance Mx, but seeing that it was more in mice of gaming that I would have more chance of finding my happiness, I therefore decided to look for this with side-there.

On the side of the mouse for players, the mouse with multiple buttons, they are legions! You can even find mice with 12 programmable buttons! But alas, coté wireless, it was and is still not joy!
Basically, as mice for players, they are more sensitive (high DPI), and therefore consume more! In General, it must reload them every day! I could have back on mice with wire, but once one has tasted freedom, hard back with rope to the neck! In addition, some wireless mice use databases, however as I am with a laptop pc, I did not want to restrict its movement with a large base that serves as either basic reloading or database link, or sometimes even the 2…
In addition, I'm not a hardcore gamer, so I finally gave up my search for new mouse at the level of the mouse for players… Despite the fact that they often have a multitude of buttons and that side design, they do provide in also!

To return to the office pc mice, mice with more than 3 buttons, you have very little and most of them are with wire or then come from little-known brand… So with very little choice, and knowing the quality of Logitech because my old mouse and reputation already, so I decided to buy the Performance Mouse Mx!

I still hesitated before buy it, despite the fact that by reading the different opinions on the net, one can find 2 defects in mouse: the placement of the buttons and independence!

On the side of the placement of the buttons, these are the zoom, next and back buttons that indeed are placed slightly too high. But after 3 days, once accustomed with the mouse, there is more no difficulties and you get used to.

On the side of autonomy, it is low compared to other mice: for example, the M215 takes several weeks, or even months with a single AA battery! While the Performance Mouse Mx takes approximately 1 week! 1 week is little, but when comparing to gameurs mice that do that day, it is already great! It must take into account 2 parameters which, I think, are not negligible: the mouse is capable of operating on glass (transparent) and the number of programmable buttons I use practically the whole time!

FYI, the Performance Mouse Mx Logitech, it is:

This mouse, while output at least 4 years ago, is still sold in all good stores! Many mice are no longer sold alone after 2 years! If it is still sold, it is because it sells well, official site from Logitech offers the always, and it is still part of the best mice in different classifications of wireless mouse!

Certainly, 3 buttons are placed up to reach with your thumb, but with the usual, there is and one is more careful.

Autonomy is still acceptable even if it is not extraordinary. The supplied AA battery is a battery 1900 mAh Sanyo Eneloop (from what I've read, these batteries are considered as being among the best batteries in the world!)

Side ergonomics, it is excellent for the thumb, forefinger and middle finger, but I find that there is something missing for the ring finger and the little finger. I think that a small support as for thumb would have been excellent (especially if in addition, one or 2 extra buttons would be present!).

Side design, it depends of each, but I find it pretty without being extraordinary.

Rated weight, it is quite heavy, approximately 130 gr, for a guy, no worries! But for a girl, it might be more annoying.

At the level of the software that is provided to maximize the functions of the mouse (it can work without), it is clean and clear, but I find that it is not very intuitive… I went a mouse without parameters to a mouse with a dozen of tunable parameters, and it took me more time to familiarize myself with the software only with the mouse! But it is fairly complete, for example, depending on the software is launched, you can set another assignment of the programmable buttons! More concrete example: one of the buttons did a search on Google when Firefox is open, and this same button directs a unit to attack in a game when it is open! And that, without doing anything, it passes from one to another automatically thanks to the Logitech SetPoint software!

In short, I really recommend this mouse to all those who are often on their computer and with 3 buttons are not enough! Except for some minor flaws, this mouse would be perfect!

Alone with the mouse, I do:

And these actions can be modified according to your desire and launched software!

In addition, small bonus, it comes with a kit to fill carry cables and Chargers if necessary! 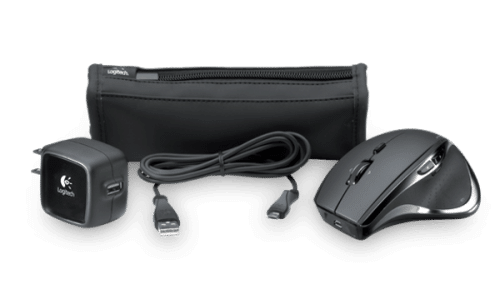 Because it is popular, you can find it in almost all good shops selling mice, for about 60-70 euros, or on Amazon. On the Logitech store, it is 80 euros.