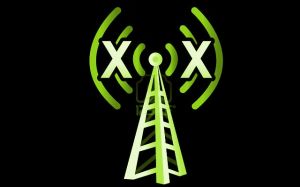 With my recent change of my Android smartphone rom, I do enough attention to detail, history does not find me with a bug not listed and which would prevent me from use my smartphone in need, because the rom is not the "official" of the manufacturer (but even the manufacturers Android versions are not free from bugs the Samgung users familiar with this problem…)

In short, I then noticed that my GSM network signal remained at 3 bars little matter that I am inside my house or outdoors… What was, well on, not normal because I remembered that with my old phones, I always reached the maximum in quality of the networks, it is – to say the 5 bars!

So I first suspected that it was my rom that had not been well coded and giving lower performance than usual… Then, I remembered that on the official Android version of the constructor, I had made some changes to optimize to the maximum the battery, and one of them touched the GSM network! A change that I had on not yet done on my new version!

After some quick tests, it turned out that my tip well significantly increased the signal of the GSM networks!

To increase your GSM signal (and this, without application!): 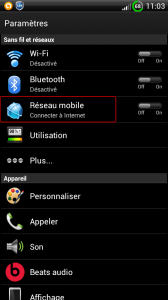 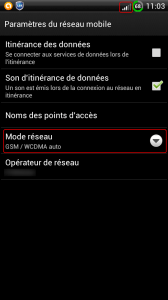 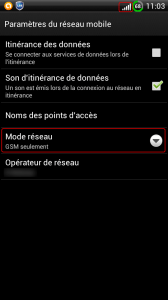 And voila! As you can see on the screens of 3 bars of signal GSM, I went directly to 5 bars! And whenever I've tested, it gave the same result!

For those who are asking the question of what has changed, it must first know that there are 2 standards for the mobile phone, GSM and CDMA.

GSM is used in Europe and CDMA in the United States. Smartphones can virtually be used around the world, making that the default configuration is "GSM/WCDMA auto" to have the opportunity to choose!

In our (European) case, we have need of the GSM networks, where the "GSM only"!

That it has specified the GSM network to our Android smartphone, in addition to improving your GSM signal, it should in theory (because not tested), extend the life of your battery (it should no longer monitor the CDMA network and much stronger signal reception => should not consume more to have better reception) and also improve your 3G network signal!

Edit: It seems rather than my cup Tip 3 G network… So only use if you don't intend to use the 3G.

NB: The screens may not look like your screen on your own Android smartphone, but it follows the same principle and the headings should be identical.