Skip to content
Home » Unclassifiable » The point on the Windows Phone

In the world of smartphones, multiple operating systems exist, the well-known iOS from Apple that team than his own appareilsn as well as the Google Android which team almost all of the other smartphone brands. But there are also the Windows Phone, especially on devices of the brand Nokia type Lumia (now Microsoft Lumia) that are equipped with Windows Mobile 8.1 (Windows 10 should be out in mobile version also), is a small share of market, but which deserves to be known. That is why I will explain the main features. I me not attarderais on the technical specifications but only on mobile Windows functions.

If your computer has one day shot under Windows 8, you only will be absolutely not destabilized by seeing the home page of a Windows Phone. It is exactly the same office with the ability to add applications and move or enlarge the thumbnails (or tiles), which makes it suitable for any age. What will make it intuitive for the majority of the people with a computer.

It is highly customizable, you can add tiles and place them where you want depending on whether it is a shortcut that will serve us often or not. It is also possible to group several tiles in a single, kind create a folder for social networks, or mails etc… As you can really create his office it makes very simple phone to use. No need to go through different paths before reaching our goal. What will differentiate the smartphones running Windows of its competitors, is the fact that the office consists only of a page that can scroll vertically. Unlike Android and iOS where navigation is done on several.

The advantage of the thumbnails is also updated in time Réel (internet connection required). Example for the weather (available from the smartphone-based vignette) no need to click on the thumbnail to see the time it will do in the coming days, everything is displayed on the thumbnail. Ditto for social networking applications, the new notifications appear on the tile. What to know everything at a single glance. 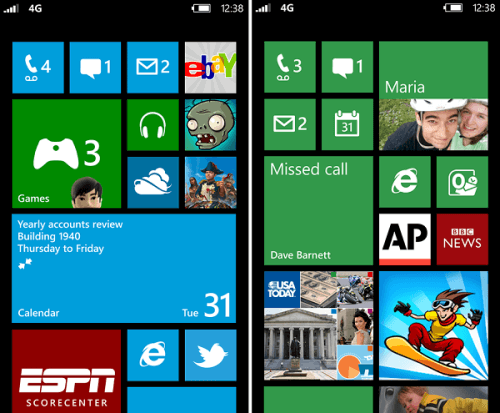 Lumia Camera application allows you to take pictures (which are excellent qualities), Studio creative allows you to edit your photos, travel diary is going to geotag your pictures and place them on a map world so that you still have in memory the exact position of your photos and finally consulting will be very useful for accompanying you at the beginning of your use.

But the Windows Store is not as rich in applications than its competitors. Only hits, applications and games, iOS and Android are found in the Store Windows. However, it will meet your expectations if you're not a junkie of the last application of the moment. He has everything it takes to have a fully-functioning smartphone, you can download all applications in social networks, banks, games to success, short everything you need to have a brave companion at your fingertips.

However, there is an application that did that I focused on this type of smartphone: Here (of base in the phone). This is a really well accomplished GPS application, where it is possible to download the maps of all countries of the world (except for very few countries) in the phone's internal memory. The smartphone is equipped with a tracking system do not necessarily have an internet connection (wifi, 3G or 4G) for a guided real-time navigation. What makes that in addition to having a smartphone you have a GPS Board (purchasing a GPS is often more expensive than buying into the entry-level of the Nokia Lumia).

That is what one could say.