For a time, fashion was to make mobiles more small. Now, it seems that the trend will be reversed, then why not add a more retro touch with a cone of phone?

Here is the test of a handset for smartphone. 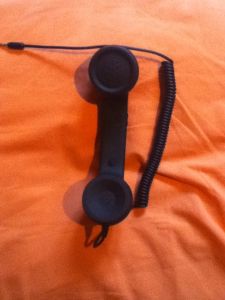 This is undoubtedly the appearance of a cone dating years before our goods, dare I say, even the old Millennium. This is not plastic but plastic, kind of rubber, which is very soft to the touch.  It is very nice to take in hand. And does not crack when used heavily. Its appearance gives it a robust air, although I've not tried the dropping… :-)

It also has buttons to quick access, which are:

An interesting feature is that it can bind to all kinds of smartphone equipped with an input Jack 3.5 mm, that is to say the vast majority.

But hey, what made the most of this handset, this is the stretchable thread! :-) Who does is not amused to wrap her fingers in there while making a call?

As mentioned above, it adapts to many phones via its 3.5 mm Jack.  But it is also the default. Because having spent several calls, I had my interlocutor saying hear sizzling from me, while I was in a quiet location. A little off the Jack in my phone and the sizzling so I is reduced, without ever completely disappear.
On the other hand, I heard very well what they told me without worry, the sound is very clear and volume (by the side keys) change works very well.
So for the reception: 10/10 and for the issue: 5/10, because it gene the interlocutor (he hears what we say but the background noise is disturbing)

In the title, it says: "Hands-free Kit", I do not know too much why it has been… Because this is the kind of cornet that we always keep in his hand, or wedged between head and shoulder. But that it is certainly impossible to take in our car. 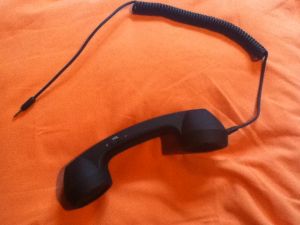 Combined with its volume settings buttons

Even if it is pleasant to look (and it is pleasing to the ear) so that usable by all, because of disturbing the interlocutor made him lose many points. Perhaps you need to find the correct orientation of the plug jack.

If you are interested in this article, think to throw a glance at other accessories for iPhone or another mobile shop Mobilefun.fr