Here is the test of 3 fans newly released at Alseye.

As its name implies, Alseye is a specialist for many years in the manufacture of elements for optimum cooling for your computer. Better known as OEM, it recently decided to release its products under its own brand. 3 fans I'll test call S – 120, S-90 and S-80.

Their particularity? Their silence, and I suppose that the S designation is for Silent.

N.B.: for the S – 90 and S – 120 packaging, has a black ink cartridge printing has been spilled on it. Personally, I don't trust the packaging, but the content, but however that these are copies of tests I received and Alseye informed me that those that are distributed are much prettier! From what I can see, is that these are versions limited speed of the CL – 120 (the CL – 120 being the LED version of the CS-120, which is a copy of the Susurro fan) to reduce the noise of a fan, there is no miracle must reduce their speed. Slower = less turbulence = less noise (usually). Moreover, you can see pretty quickly with this summary table.

As noted quite quickly, as the size decreases, the speed increases, and this in order to keep a bondebit of air. Unfortunately, sound noise also increases. And the fact most important rotation, consumption, also! First of all, you should know that they are based on the CS-120, if I'm not mistaken, however it has not been designed at the base for the silence, but only for performance and 120 mm (1 released and available at the moment). Let's start with the S-80: 26 decibels for 28 cfm, with a consumption of 3 watts. Well unfortunately, it is not what I call a quiet fan! Flow is more correct, but it is silence that it failed… For the S-90, it is already better! I would say that it is acceptable 21.98 cfm with 21 decibels is more than correct. On the other hand, for the S-120, then on hand in any other category! It is ranked among the best silent fans! 68 cfm for only 20 decibels is a sacred feat! 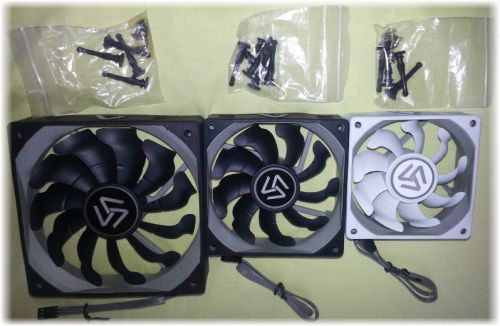