Colds for mobile media, there are all kinds: with 1, 2 3, 4, 5 or even 6 fans, small fans or big, plastic, metal or bamboo supports, etc… In short, the variety is great… just as the number of models of pc laptop, even bigger! And it's one of the reasons for which some people think that tablets of colds for laptops are not effective: it is simply that they are not adapted to their laptop! Well, okay, there is also the "scams": the brackets with 1 small 8 cm so fan support is 30 cm long (and also computer) or those which the fans is 10 cm from the pc… Completely ridiculous, as blow yourself on the computer, this will have the same effect! As, more the fan is small, more it must turn quickly to have a greater flow, and that said turn more quickly said more noise! In short, if your fan does not have half of the support surface, forget live! Might as well put earplugs in plastic or Cork below your computer to raise and have a little more fresh air, that you will be cheaper for the same effect and no noise! Back to the classics of cooling media, who are expected to work a minimum, given the number of model of laptops, it is simply impossible to get a Tablet for each model! Where the fact that in 3/4 of the cases, they put a fan in the Middle! This allows them a very high compatibility while cooling a minimum. Unfortunately, our laptops (and therefore inevitably their support, for the most part) are of rectangular shapes, therefore longer than it is wide. But fans have their square support frames, so they are limited by the width of the support! For a 15.6-inch laptop, you'll almost never a fan more than 20 cm, and even if you have one, you will have about 5 cm from each side which will not be covered by the new fresh air fan will bring, as well as the corners… Gold breakdown of notebook PCs are mostly on the sides and corners! As you would expect, I have not told you about this if it was to test a new "classic" laptop cooling rack! The cooling rack I tested this time around is the AE-CP1501 AMNIE for 15.6-inch to 17-inch laptops. The peculiarity? It has 4 fans arranged crosswise! 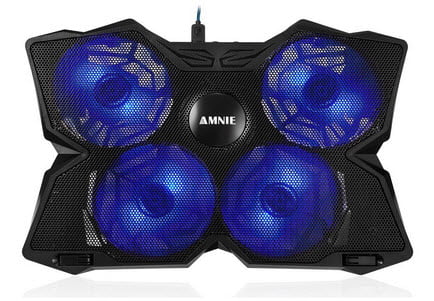 As you can see, putting fans on the cross allows to achieve a better surface for fresh air. In addition, this provision is not insignificant: 2 down fans are centered, which is battery hair on the area of the / of the drive (s) hard (s)! 2 the top fans are separated at the extremes: they still are not trivial, they target the hottest areas: processor and graphics card, and so the main areas of fresh air of laptops! 4 fans have a diameter of 11cm, which is not particularly big, but not small either. These are illuminated by lights blue color LEDs, not especially useful because they are hidden by the laptops, but hey, why not? The design isn't too bad for my taste, for the face before, I hesitated between the cross and the butterfly, but the back makes me think of a Spider Web. A little imagination, and is a: a butterfly struggling in a Spider Web. And who says said butterfly flapping its wings and thus triggering a tornado! (Of course, we will see later if that is really the case!) At the hardware level, metal with of acrylonitrile butadiene styrene (ABS plastic). 2 feet on the front surface to the pc, and 2 feet to the back surface for 2 angles of inclination. 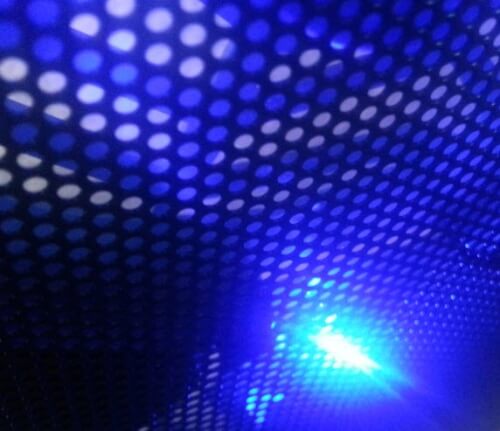 Level connectivity, it uses a USB port and provides one free as a USB hub. 2 casters (1 for the fan of the lower pair) and 1 for those top that can adjust the fan speeds are available next to the USB hub. Rare element, it can stop fans (with click to see that it reaches the area of judgment of the fans)! Which is great! (When stopping, the LEDs will turn off, and this is the only way to extinguish) Another also rare element, the supplied USB cable to power support is sheath! A compartment is provided for this cable in case of transport under support. 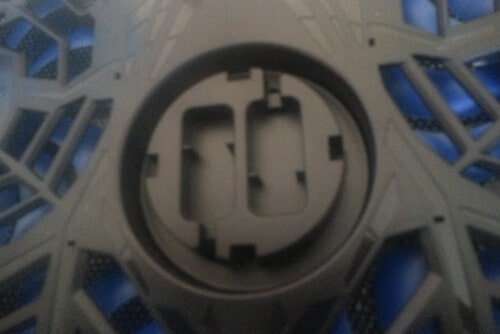 By against, the rollers and the USB ports at the rear of the cooling plate, which is not very practical…

Now, on the side of performance…

Without a doubt, very efficient! Of more, unlike all the other shelves of cooling, and despite the power of fans, it is y so to say no or little air escaping on the bottom / side. Temperatures obtained are carried out at rest, and this, with pasta and heat to high dissipemment heat pads. Sound level, it is not silent, but it remains widely acceptable and is not at all bothersome at full power.

Excellent support of cooling with 4 fans. Performance thanks to the fans but also thanks to their broadband investments! Flow, which is adjustable until the extinction of the fans! The noise level at full power still acceptable. On the other hand, that speeds adjustment knobs + USB ports located at the back makes a little less ergonomic support.   Product link: http://www.amazon.co.uk/Laptop-Cooling-AMNIE-AE-CP1501-Cooler/dp/B00ZFI6ZHE/