When I got fans who have code-named CL-120-B and CS-120-R from Alseye, I was somewhat surprised because their pale reminded me of another tested model recently… 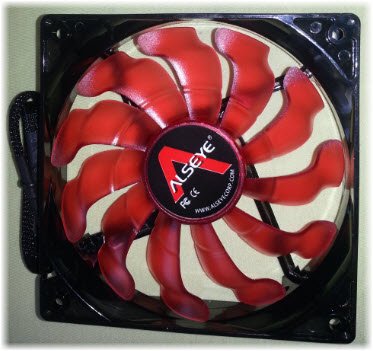 After checking, it turns out that these 2 fans illuminated by LEDs are variants of CS-120, which is the copy of the tested here fan Susurro! After investigation and if I'm not mistaken, it turns simply Alseye as OEM has worked with Alphacool out the magnificent Susurro fan aka CS-120. 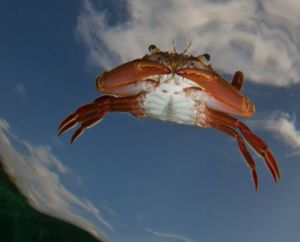 While at Alseye, explains the design of the blades by a thorough study of the flying crabs (that the passage I was totally unaware the existence… but they actually exist and the fact that they swim so fast that you would think that they steal, from which their name! Thanks to Alseye for making me discover the flying crabs! xD), at Alphacool, they simply named Susurro (which means "whisper" in Spanish). There is still a small difference between the model from Alseye and Alphacool: 100 rpm in terms of speed and 10% in terms of audible noise. But of course, these small differences don't change nothing in reality. So going back to the CL-120-B models and CL-120-R, they are therefore 2 fans design boxes illuminated by the presence of 4 LED bulbs:

The Alseye CL-120-B the Alseye CL-120-R the fins become translucent and the support itself, but slightly! Byebye so the silicone shell that can be found on the CS-120/Susurro! The fins of course color change depending on the version and accompany the LEDs: they become also red to the blue light for version B (read) and version R (ed). So what about these fans? As for performance, nothing to say! They are excellent, which is not a surprise:

Cables are black and sheathed in black. On the other hand, the screws are not colorized, so they are grey metal shiny. And in 2 models, I received 5 instead of 4. Pity they were not painted in black, generally, our boxes are black… 4 anti-vibration screws are also provided. And that's good, because the hull softened the vibrations, but especially the 4 screws anti-vibration who do most of the work! At the design level, you would think that these 2 models have the same effect, that it wouldn't be just as the color of the Leds that would change… Hey Ben! As weird as it may seem, the blue model has a stronger and more dispersive model red light effect! We have even the impression that the blue model is bigger than the Red! On the other hand, little trouble with the blue copy I received, this one has 2 Leds that have a problem and contacts according to the vibrations, sometimes they light up, sometimes they are just not on! From what I can see, it is at the level of the weld at the level of the head of the leds, it is virtually invisible… 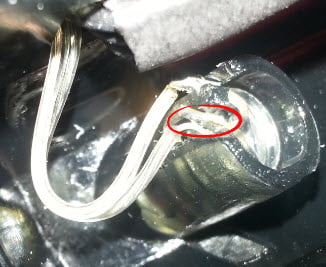 And for some reason that I do not know, there is still an excess of cable at this level, and this excess forms a curve at the entrance of the led and accentuates the pressure on welding… Ultra fine wire very thin welding + pressure => risk of cuts.