With smartphones, it often runs out of battery because its main use is no longer always call, and some applications are known as energy-intensive, such as the GPS or the games in HD. And how many times that no us happens not to say during a call: "I'll have to hang up, I'm almost out of battery"? Being in this situation is annoying, that's why I present to you the laptop battery Olixar added with a capacity of 10.000mAh!

Presentation of the product 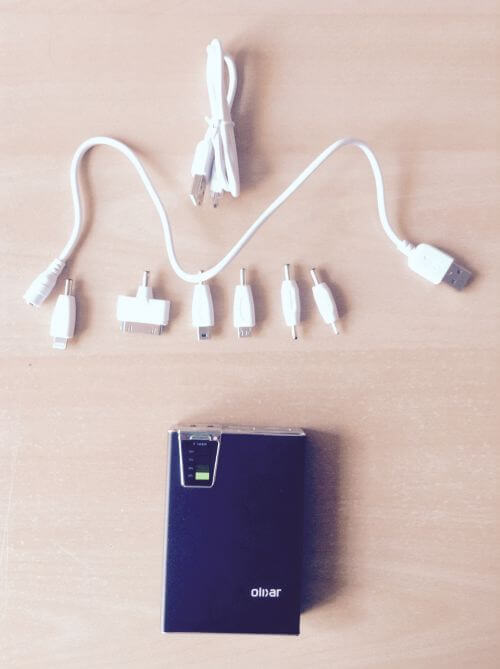 The battery comes with a micro-USB cable (for charging) and a cable which can put the tip of his choice, according to the material to reload (the use of the original cable is also possible):

The Olixar symptom battery has several functions, in addition to recharge devices! But let's start with this point: with a capacity of 10.000mAh, this battery is able to charge almost 9 times an iPod Touch fully or well 1 times iPad Mini 2 and still 1 iPod Touch! Either recharge the 2 at the same time with two output USB ports (one of an output of 2.1 and the second of 1). What to say! Time to drain the battery of our device and external battery, we should have joined a place where there is a plug! The charge of the appliances is quick, if you put them on the output of 2, 1. (For those who accept of course the 2.1 A) On the other hand, the big downside is time to recharge the battery takes itself. To fully recharge it took me… 10 h! We should therefore provide the time to recharge before… We see from left to right: upstairs, the port to put an SD card followed by the micro USB port to recharge the battery and finally a flashlight. Downstairs has two USB port, one an output of 2.1 and the second an output of 1.   As it is a battery that can be used outdoors, developers have found it interesting to incorporate a flashlight. It is true that if it supports with itself when you are camping, have a flashlight can still beings of the most essential. The last function of the battery backup is to have a location to put an SD card. It is a small more which may be interesting if we need to empty our SD card from these photos and that the available computer lacks port SD.

With its huge amount of energy storage, this external battery can be helpful during camps long journey by train or by car. We appreciate its size and weight that make it a perfect travel companion. Additional functions can still be useful in certain situation. In addition, it is compatible with all current smartphones including that of Microsoft, Lumia 640XL.