Laptops, due to their compact format, do not allow to be easily editable at the level of the internal components (hardware), unlike desktops. This is mainly due to the fact of miniaturization and welds.

But fortunately, you have still a few components that you can easily change and without too disassemble the notebook PCs, you have inter alia the following: hard disk and RAM (ram modules) that usually have a removable plate on the back allowing you direct access to replace.

Less known, the dvd/blueray player can also be changed to for example a 2nd hard drive.

Well Yes, it can also be and in principle very easily (depends on the model of your laptop, of course) removed and replaced with another card wifi! Except the hatch, you usually 2 screws and 2 wires to remove!

Why change the card wifi? For various reasons: problems, performance, or functionality!

In my test, I'll replace my wifi card that was provided by default in my laptop, which is a network card basic type Wifi 802.11n, without bluetooth. I therefore replaces it with the Silverstone ECW01, which is a Wifi card also in 802.11n, but which has the advantage of having the feature Wake On Wlan and Bluetooth 3.0!

The Wake-on-Wlan is a function that can wake up remotely your computer through the Internet! No need to be physically present at your computer to turn it on!

Bluetooth, I won't make you the affront to speak to you, I think you know what it is! ;-) But in addition to the advantage to bring bluetooth to a laptop that the base had not seen that it is an internal component, more need for usb bluetooth key protruding from your pc!

In short, a laptop PC which had as the wifi connectivity, by changing the network adapter, I get a laptop equipped with the Wifi and the Bluetooth! (in addition to other functions!) Isn't this wonderful? ^^ 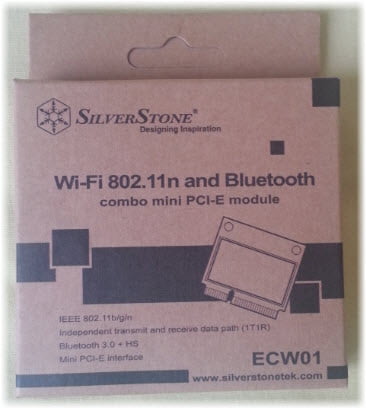 I won't make flow tests, it's completely ridiculous since it first depends on your internet provider, your subscription, the line, your facility, your router, and everything which emits waves! In short, your entire environment in its entirety comes! So many elements involved and which may simply change has not even 1 meter distance (range wifi + interference for example)!

The main in a wifi card, it is that it works, receives and sends correctly, order of speed normal even standard (and speed between the router and the wireless card), and not (other than interference) cuts.

During my testing, I did not notice error, than it is rated speed in the standard n (speed practical compared to another wifi card, and not compared to the theoretical speed). Level bluetooth, I have not noticed a big difference between a USB bluetooth and card ECW01. The only difference I have noticed, this is a slight decrease in the distance, but it is really minimal and it has been tested in an environment or there is a lot of interference and elements blocking, so the difference is really negligible!

On the other hand, what I have noticed, this is a greatly improved speed of connection to the router!

The drivers are not provided by default in the package, but you have a paper in telling you the link or you can download the driver on the site of Silverstone.

As the Wifi chip is the Ralink and the Motorola bluetooth, drivers are these marks of course.

The driver and utility for Ralink is very comprehensive but in English. And I must say that I was not expecting to make it as complete! Using this utility, I have almost as much need of wifi access point that surrounds me to know their strength and other data! Almost everything is integrated with graphs! 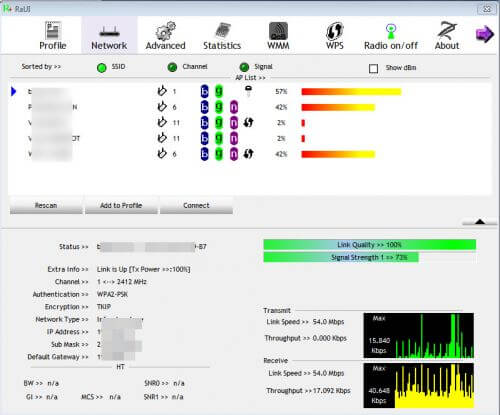 On the other hand, at the level of the bluetooth… I almost want to say that this is the day and night between the 2! Far too few options and I have not even found the option of scanning! For example, if I run a scan from my smartphone to find and connect to the computer, no problem, everything goes correctly. But for headphones audio, so a device without a screen with just one button for the pairing, given that your computer will never scanned search new device including helmet, ben… the connection will be just impossible! The helmet will look long and find nothing!

To bypass this problem, I have unfortunately to do call to another software: Bluesoleil which has crushed the driver of Motorola… When same shame that should use another software paying for access to the real capacity of the bluetooth module! 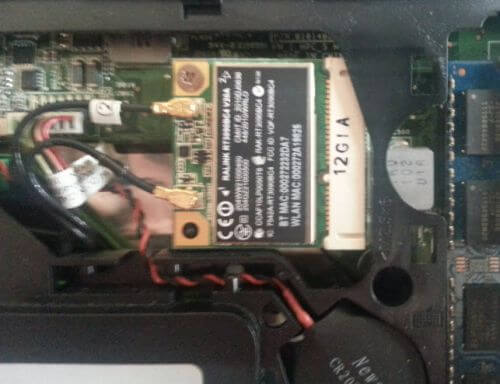 It pretty much done its job, it is a good alternative to a replacement of a faulty Wifi card or an upgrade (improvement) to your laptop. Only big problem is the driver for the wifi module which allows only the connection only in one direction, a little as if the computer was a helmet, so no possible action except pairing!

A more advanced version, but with no bluetooth is also available under the sweet name of ECW02 at Silverstone.

N.b.1 as any change of component internal, it is necessary to check the compatibility ;-)

N.b.2 this wifi card was announced with an expansion card for desktop computers don't have PCI-Express slot, but it was not yet released at Silverstone.

N.B.3: Attention that certain brands of PC like HP and Lenovo prevent installation of new wifi cards (and other devices) by the presence of a white list in the bios (this allows them to sell the so-called "officially compatible with your pc" cards 10 x more expensive…) And when I say 10 x more expensive, the worst is that this is not even a phrase!). For against this, we need to change your bios to a modified bios (modded) and unfortunately, this involves certain risks…