Today, we look more in addition to films on our screens: television, computer, laptop pc, Tablet, smartphone,… As before, it looked more often watching films at the cinema. Grace (or cause, depending on point of view) to the Internet and technology, watch a movie on a screen is very convenient. But say, watch a movie on a screen and a film projected on a screen gives different sensations (in addition to the atmosphere), and for a simple reason: a movie you're watching via a computer screen directly projects you all his light in your eyes, which is much more aggressive than when you watch a movie at the cinema: the light is projected on a screen and it is this passive form which you refers its light widely reduced! To do like in the movies at home, there is no solution, need you at least a retrovideoprojecteur! Alas, on this side here, not a lot of evolution: the majority are impressive, but above all extremely expensive! It easily exceeds the 500 euros. There are portable projectors, but they have 3 big problems: the price, brightness and battery! Quite expensive (easy 200 euros), very low light even if there's led, and the battery doesn't just for film (and again, in the majority of cases, you lose the end of the movie…) So how to fix it? Simply by returning to the basics! As they say, is in the old pots that you make the best soups! Who has not dreamed of having a smartphone including the battery would hold as long as our old Nokia 3310? Here, for the projector, we will use the same principle, a return to the past! The flaws? Battery/energy, lamps and price! Then withdraw them all simply! xD with all electronics, given that you have more power source. While we have it? Simply one or lenses and darkroom, i.e. almost the base of a projector! What are we missing? The light source! Well, so use our smartphone! 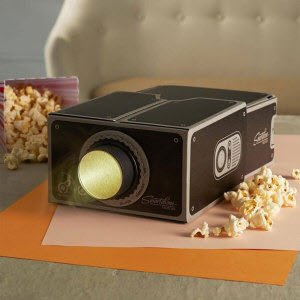 The projector smartphone is cardboard, you mainly 3 parts: a black room, which just fit a party intending to collect the smartphone (and make the development) and on the other side, a converging magnifying lens x 8. Technically, not complicated to assemble, it's a bit like Ikea furniture: it is beautiful, not expensive and censer be easy to mount. For beauty, color and tastes are in nature. But some images are upside down… Price aside, it's probably much cheaper than a bright projector! Easy to assemble… Ben unpacking, installation is already half done, you have just to paste some parts! The instruction manual is printed on the carton. The hardest remains to insert the lens into the holder. And as the Ikea furniture is to the millimeter! And unlike projectors, here, is not the lens that we're moving to develop, but the light source!   Tested with a Galaxy S3, which I believe that the most of the screen brightness is strong enough (personally, she me flashed eyes, even during the day), the projector enlarges well and does not distort the image. But it is not bright enough. It is normal to lose brightness, but I wonder if it is not possible to lose less… By comparison, Android has a widget that allows you to control the brightness manually in 3 levels: minimum, medium and maximum. Putting the brightness up on the smartphone, the projected image is, I would say, as if the smartphone had the brightness at least… In short, the basis is a great idea, but in practice, we lose much too light, even at the minimum distance, and especially for this price there! With a much better lens (or more), this projector would be much more interesting! Other worries, if you lift a little too forward of your projector, depending on the weight of your smartphone, the rear of the projector (or where you put your smartphone) can open under the weight of it because nothing keeps. Pity, because it is fairly simple to solve and not expensive at all, a few centimetres from scratch band would widely enough! After, maybe their goal was about building plastic carton, but good, the lens is not cardboard eh… And even, if you want to "complicate" a little more (I speak for them, to make saw that they should change their model) and stay in the box, instead of having a tab to open the drawer to the smartphone, simply put a slot and a l anguette to close the drawer. In short, the idea is excellent, it works, but it is expensive for the results it gives… N.B: it is compatible with smartphones having maximum of 145 mm in width and 80 mm in length, which corresponds to smartphones with a screen of a maximum of just over 6 inches. The projection distance is 1 to 3 m with an enlarged image of 8 times.   Link: in http://www.mobilefun.fr/51734-videoprojecteur-universel-cinema-pour-smartphone.htm