I was very disappointed with the projector for smartphone that was used as a lamp, the smartphone. Moreover, it would seem that Pizza Hut has decided to use the same principle but with their pizza box… I can already see the Bazaar from here: we place its smartphone at the bottom of a pizza box impregnated with oil and tomato sauce, box to which we add the essential also stained lens, and you watch your movie while eating your pizza… Oh and by the way, how the smartphone does stick to the bottom of the box to pizza, perpendicular? Ben tomato sauce is made for that, Hey! hour-_-' so back to basics, and a projector multimedia to LED lamps, more classic test: the TS-40 or UC40 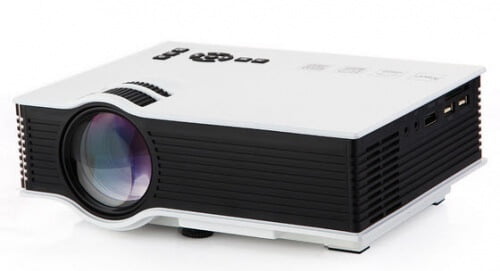 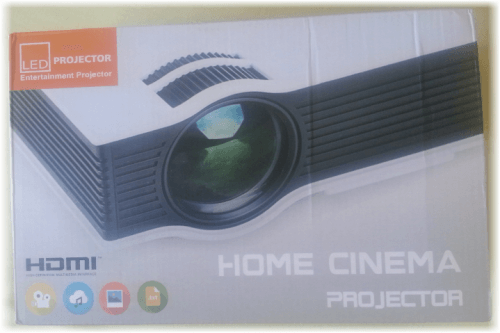 At the design level, although nothing special, a rectangular box with surface Central, black upper and lower white and level. Relatively simple, but effective! At the level of the projector type, this one isn't tagged as being portable, but due to its weight, which is a single kilogram, it is relatively portable. A laptop easily making more than 1.5 kg! In addition, it is quite compact. On the other hand, not wrist transport or carrying case. About satchel, the projector has a rubber protection at the level of the lens, easily removable. But it does that when the lens is "back". Once the lens is out, protection no longer holds. At the level of input connectors, you are largely quiet: HDMI port, SD card and USB port. In short, largely sufficient for a wide range of use, whether for work, watch videos, perform demonstrations, etc… Use, but also compatibility with your devices, as shown in this picture: the LED projector is compatible with: computers and laptops, smartphones and tablets, digital cameras, video game consoles, the dvd players, bluray, etc… Of course, everything is not displayed in this image, you also, among other things, the HDMI stick, allowing you to instead of having a smart TV connected, you can have a smart connected projector! :-D At the level of the quality of screening: the first thing to say, is that it depends in part on you! :-) The keystone and the focus can be adjusted manually. The projection distance goes from 1 meter and dust at almost 4 meters. Projection brightness is very good, the projection is perfectly visible in daylight without problem: However, a defect that I believe not the least: noise! The projector made a huge noise that reminds me of radio-controlled model aircraft engines… Watch a film with a similar racket behind, not very nice… Moreover, the hot air from the projector evacuation zone is located right next to… ports of entry! That means that by heating and discharging hot air, the projector makes heat your devices or cables input… Not ideal at all! An infrared remote control is provided and requires 2 AAA batteries (not supplied). The elevation of the projector can be done with a screw placed in the lower part, the centre forward.

Easy to use, the quality of projection is excellent, especially at this price. Various ports of entry are present for a maximum of compatibility and usage. On the other hand, the big flaw is the noise produced by the projector while in operation. In addition, the warm air venting is located right next to input devices, which means that they will heat instead of stable temperature, however they are generally components that do not have the habit, and being heated.   The product link: http://www.pandawill.com/ts40-uc40-portable-mini-800lm-led-multimedia-projector-home-cinema-theater-white-p101664.html $ 10 Discount Coupon available exclusively with the cave of Pandoon with the code: buyts40. Thanks to Pandawill.com