Who says summer, said heat! Finally, in principle since the seasons are completely wrong…

And one of the defects of laptops, it is their heat dissipation! Notebook PCs have all struggled to evacuate the heat because aeration zones are located under the pc, however this area is crowded by the office or any other media on which it is placed, and this problem leads to others! Moreover, I make a small aside, but our smartphones would also need a better heat dissipation! Just play a game 5-10 min so that the hull iphone heats up!

In addition, it is not in summer that laptops overheat: just run a game like Starcraft 2, make a video editing or any other program that requires power for the computer begins to heat up and produce a special sound: the sound of the fan running at full speed! And despite the fact that the fan runs at full speed to cool internal components, the upper part to the fan, that is the keyboard also begins to heat up!

The noise of the fan and the heating of the keyboard may be acceptable in some cases, but that often ignored, is that this overheating is bad for the internal components of the pc! Overheating reducing their life expectancy! In addition, this overheating can also cause other worries: slowdown of the laptop, bugs, freeze or even stops non-programmed from the pc!

This is why it is important to properly chill his notebook, because as they are portable, they travel extensively and take much more dust than a simple desktop computer… a dust that will clog fans and reduce their effectiveness!

Moreover, I will give you some tips:

Here is a ventilated support, that of the Ecofan XL of Macally test:

Macally Ecofan XL, this is:

Because the choice is huge, the question that arises is: why did you decide to test that one among so many others?

There are 3 reasons for this: the size of the fan, USB port and bamboo.

In short, nothing with the last 2 reasons for my choice, it can be said that the design of the dock of cooling has been sought, studied, and that this is not a simple fan that we will sell you at a price hard making you believe that it is effective! We feel that there has been job behind: dual passive cooling (elevation + bamboo) and active cooling with USB adapter!

Good, everything, we can say that was the theory and marketing, but in practice, what is it really? 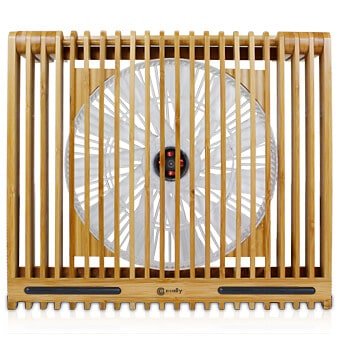 In reality, the dissipation of the heat by the bamboo can be exploited as it can not be exploited, thanks 2 rubber non-slip tips which are removable and which raise or your computer. But even if it is exploited, it is very low, the support consisting of 22 vertical bamboo bars 5 mm in width.

On the fan itself, it has a radius of approx 11 cm, is capable of 600 rounds per minute and is very quiet! I was pleasantly surprised, because it is much quieter than the one built into my laptop! Incidentally, when I plugged it, I had to check that ventilated support works well because I heard no noise! In reality, its noise is concealed by my own computer!

What I also noticed and appreciated with this ventilated support, is that when it is in elevated mode, there is a small stream of air that refreshes you also, it is not huge and not what make you catch cold, but it is rather pleasant.

Side finish, alas, are not bad of small pieces of poorly cut bamboo, pay attention to the risk of splinters!

At the level of the waist, it is barely smaller than my computer 15 inches. Its dimensions are 33.4 cm long, 29 cm wide and 3 cm high. With a height of approximately 7cm when it is in elevated mode. 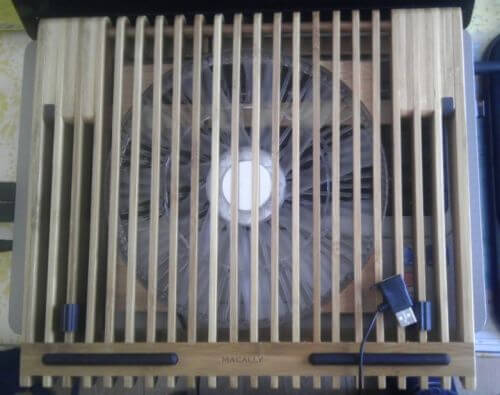 And the big question: how effective is it?

Effectiveness depends on the pc and the layout of the various components… for my pc, the hard drive is located downstairs (to the level of the touchpad) and almost directly in contact with the underside of the pc (I have just 2 screws to remove and I can remove the hard drive), while the graphics card is located at the top right of the keyboard.

In my case, when my computer is idle (less), support only decreases the temperature of my hard drive of 20%. He was unable to reduce the temperature of the other components… Concerning the hard disk, this explains by the fact that the hard disk cache has ventilation holes, which makes it is almost directly cooled by support. The non-refroidissement of the other components can, I think, be explained by 2 reasons: the 1st is that the fan built into the pc has been recently cleaned, so it is at its maximum efficiency, and Furthermore, my pc has been optimized by myself and for my needs, which is that it does not unnecessarily use resources and therefore does not heat up unnecessarily and has little surplus to eliminate heat!

On the other hand, when the computer is highly solicited, for example for a video editing, happens to decrease the General temperature of approximately 10% over the computer without the support and 20% for the GPU! And it reduced by 2 to 3 times the time so the temperature returns to normal!

In short, it worth it? I would say yes! Other much more expensive than the media do not better! One could say that 10 to 20% of reduction of heat, it is not huge, but think again! Because 10 to 20% dissipated, they have been measured in the short-term and not long-term! This means that in the long term, this can be beneficial!

Caution however that the effectiveness measured here only depends on my computer! On other computers, the results can be completely different due to different components as well as at their disposal!

The EcoFan ventilation Tablet exists in 2 forms: the XL version and the Pro version. The Pro version contains 2 small fans running at 2300 RPM (compared to 600 for the XL version), has a longer cable (100cm to 55), 3 adjustable heights (against a single) and weighs 2 times more heavy (1.3 kg compared with 0.76 kg). But not USB adapter!

Everything4mobile is an e-commerce site that focuses primarily on the online sale of hardware for smartphones like the iphone hulls 5, covers, batteries, docking stations, shell galaxy S4, accessories for shelves or even for pc as this cooler, headsets, mice and lots of other stuff! Whether it is classic stuff or most sought-after products, there is strong chance that you will find your object out there!