It often happens to me that I am asked to troubleshoot someone about a computer or smartphone when I'm moving especially when the person knows that I know a little. And good soul that I am, I can't help myself to help the person…

Sometimes, it's quite simple, worries settle easily. But sometimes it is more complicated and requires software or specific files… Before, I was walking with a USB key, but it did not always contain everything that was necessary and I was depending on the "sick" computer, which is not the ideal, of course, because if it is unable to go on the internet, I'm also!

Now, I have my smartphone, which serves as storage and allows me to go on the internet search for some files. But he remained a concern: the passage of the smartphone to the computer files! For that, 3 options: bluetooth, memory card microSD or cable. All PCs do not have bluetooth or memory card reader, so on this side, it is usually dead. Only the cable…

Given that I have no desire to walk with a 2 m cable in the pockets, I had opted for a retractable cable like this. Although I caution in my business, it is too fragile to me. I looked after other cables, but I have yet to find my happiness: either they were not retractable, either too fragile, or too short,…

And then I discovered Smartphone U-Disk, a USB 3 in 1: 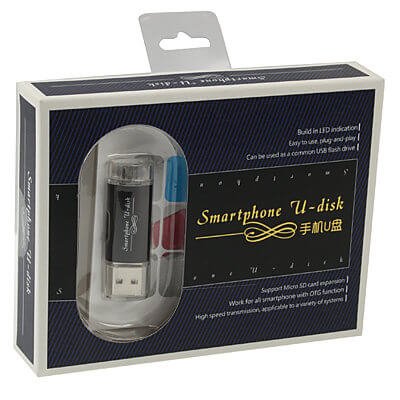 For those who ignore it, a USB OTG key is a key with a head in microUSB (those you use to recharge your smartphone or use to send files via your computer) and which, when plugged into your smartphone, is recognized as a USB drive and so you can make transfers. 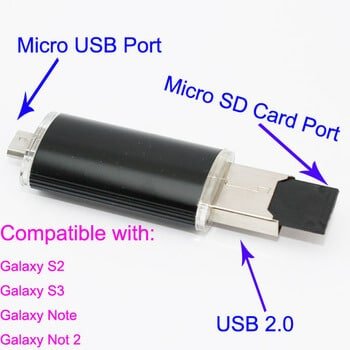 The 1st thing you notice is that the box is quite beautiful I find.

Then, at the level of the key… the design is simple and minimalist: the microSD memory card reader is located in the USB head, what makes that you cannot insert/remove the memory card once the key is connected to the PC. Personally, I find that this is a defect.
On the other hand, at the level of the transparent plugs/protections, there is a small flaws… Plastic covers held by friction. At the level of the USB head, the CAP is easily removed, much too easily! Strong chance to lose after a few insertions/withdrawals because there's no kinds of clip to hold it in place! At the level of head microUSB, at this location, is just the opposite, the CAP be removed very difficult!
Knowing the microUSB head is more fragile because smaller than the USB head, I believe that can still pass this concern for plugs and do not linger.

The first thing I made to test the key, is to test the function OTG: connection and… nothing happened! My smartphone has not detected it… In principle, my smartphone is compatible OTG, but as I roote and so much changed in depth, it is possible that it has lost its function OTG enroute… Unfortunately, not having any other smartphones OTG, find it me impossible to say if it is at the level of the smartphone or if it is at the level of the key that it frequently…

Hoping that this is not the offending key, I have connected it to my computer, and there, no worries! The key is well recognized by the pc as having 4 GB and the memory card is also well detected. I also said that the key is illuminated by beautiful blue LEDs of the listed 2.

My opinion? Hard to pronounce at the moment for this key as long as I would not know if it is my smartphone or the key which is at issue in the OTG level, because this function still is part of one of the 3 major functions of the key!

If this is the key that has a fault, it is of course a big flaw. Although still having the microSD card reader, key loses a bit of its utility knowing that usually to remove the microSD to a smartphone, it takes usually turn it off and open it… And if it is to use the key as a memory card reader, so take one of those who do only this, either specifically (microlecteur microSD card), or multi-format.

If my smartphone that is at issue, I will give a positive opinion for this key despite the weak USB head cap, as 3 are quite useful and has a beautiful design, especially when it is connected.

N.B.: The key is compatible Windows, MacOS and Linux.

Edit: The key has given up the ghost 9 months later despite the fact that I have just used it… If you ever one and it makes the soul also, remove the plastic side USB part then pull in the other direction. You can retrieve the 4 GB microSD which served as storage, in this way, you won't lose any data.