Nowadays, almost everyone has a phone. Him, there is no problem, it is all the time in the pocket or handbag. But when it comes to having the right time one of the many accessories to charge the phone when it is needed with the objects that surround us, it is another story.   This is why, to prepare for any eventuality, I tested a pack of micro USB Chargers.

The contents of the Pack 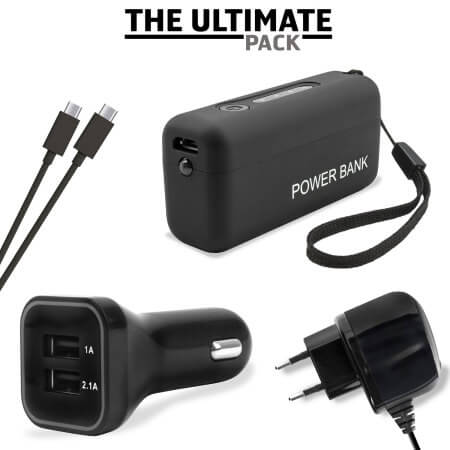 I want to clarify that the received content does not exactly match content announced on the website. But the change is to our advantage (without be sure this advantage will be long). So we have:

Here are noted two differences between the presentation of the site and the reality. For the battery nothing important, it is indeed only aesthetics. On the site the picture shows a battery with writing "power bank" on the side. The battery received is physically strictly the same, but instead of the "power bank" is noted "Olixar". For the second difference, it is at the level of the charger cigarette lighter. And there we are winning, indeed it is presented on the picture and in the description, a charger with dual-port USB, one with 2.1 charging and the other with 1, or total load of 3.1 to simultaneously. The received charger has three ports of USB, one of 2.1 A charge, A 2.0 and A 1.0 either simultaneous total load of 5.1 to! With the two cables provided with the kit, you can still load two telephones in parallel with 4.1 A of power against 3.1 with the originally planned charger. In addition the cable to charge the battery is also a Micro USB cable / USB, it is certainly short (20 cm) but enough to load a 3rd device without purchasing 3rd cable. The two differences: 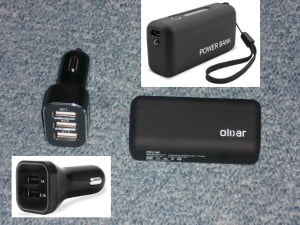 Charge for the device interface is a micro-USB plug, therefore compatible with a large part of the Smartphone market and another small handheld electronic current. But what this kit allows to survive any eventuality? The battery has a capacity of 2000mAh, is more or less a Smartphone battery capacity. It comes already loaded. When it is empty, it is recharged via a USB port, so the desktop computer, laptop or even taking lighter provided with this kit can be used for charging. By car you can charge your phone and the battery backup of the latter simultaneously. She is petite, 7 * 3.5 * 2 cm, supplied with a strap and a USB charging cable. If you press once on the button power, a system of 4 LEDs indicates the level of battery charge, 25, 50, 75 and 100%. Pressing 2 times quickly, a white LED at the front lights, using small flashlight handy for example in the car the night to find the charging cable. The main advantage of this battery is to recharge her phone anywhere, and those even in nature. Or in a building if you had you move with your phone and that you cannot leave it installed somewhere. That said, beware, it is enough for a load of your battery. It is therefore used for a one-time charge the day, but not for a long time without crossing taken. And do not forget to recharge it at night after use. 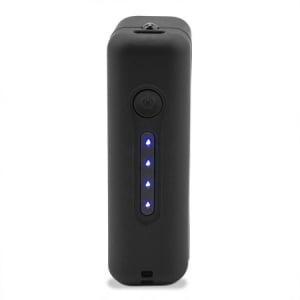 The charger 2.1 A sector with European, is the base charger and classic that goes hand in hand with a Smartphone or other device is recharging via micro USB. It is perfect for charging your devices at home, in the office or in a hotel when traveling. 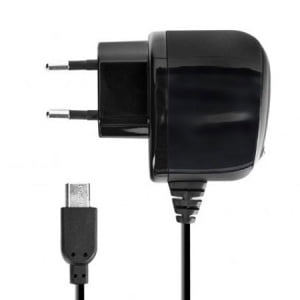 The charger cigarette lighter for the car load. Because its usefulness implies, it allows to charge your devices during a road trip. The magazine received with 3 port USB charging, it can charge 3 devices simultaneously. However note that the device plugged into the Socket 1 has will be less quickly loaded. A must in my opinion to well optimize its use is even to charge 1 or 2 devices in parallel while riding, and use the 3rd port to recharge your battery kit, for after a time out of the car. On a beach on holiday for example.   So, we have devices to load on one side and the other chargers. It lacks that pus the cables. In this pack you have two sync cable. One of 1 meter and 2 meters. There, the Organization will depend on your needs, for example to let a cable at home and a cable at the office. Or always keep this pack on you during a trip to recharge devices in parallel, be it indoors, in the car or during a walk in the Woods. These two cables also offer synchronization of data with your computer, after all why deprive themselves, it is always useful :).

This pack includes everything needed to charge your devices in any circumstance. In nature you'll have the equivalent of an additional battery of autonomy. By car, you can charge up to 3 devices simultaneously and at home, if you count the charger and 3 cables USB to load, you can go up to 4 devices simultaneously if you have enough USB socket on hand. Product link: http://www.mobilefun.fr/56345-pack-ultime-chargeurs-micro-usb-avec-prise-europenne.htm