After testing the Inateck FD1005 hard disk Dock, I decided to test their latest version, version 2 in 1! 2 in 1 because the FD-2002 is a dock for 2 hard disks! But not only is it a dock for 2 HDD/SSD, but in addition, it features the offline clone function, that is, it is able to copy all data from one hard drive to another without the need to be connected to a computer! And it's mostly this function to clone your disks without a PC that attracted me to this dock, because one must say something is that I do not like to leave my computer on without being able to do anything about it, especially for hours! There are especially 2 situations where I let my pc work and or I forbid to use it at the same time: during an antiviral analysis and when creating and transferring a full backup. Although nothing prohibits not using the computer in these 2 situations, these are 2 situations where all the files are concerned and or the hard disk is strongly solicited, resulting that any other action slows down your computer and therefore prolongs Analysis or Transfer! Thanks to this dock, no need to leave the computer on to perform only one operation especially since it will not take all the maximum resources, the dock not being connected to the computer, it will consume less energy, but do ( Normally) the backup optimally since there is no movement of files or modification during the operation, unlike a backup with the PC. Plus, no need to break your head to search and test backup software, since the dock does everything! 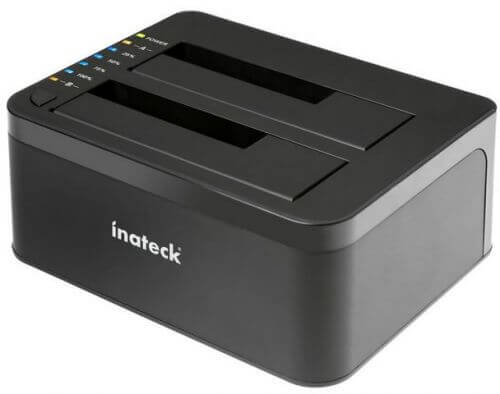 For this test, I mainly just to compare the FD2002 with the FD1005 since they have the same characteristics. I also invite you to read the test of the FD1005 of Inateck if it is not already selected. Unpacking, First surprise! The FD-2002 is accompanied by a flexible, transparent plastic cover that protects the dock from dust all over the surface and the entire height! Surprise because it was one of the flaws that I had put forward on the FD-1005, and although I had emitted the idea of putting 2 flaps, they still remedied (in their way) to the problem of dust! A good point! Second surprise is the weight of the dock! Ultra-Lightweight, it is much lighter than the simple dock FD-1005 While it has an extra function and it can accommodate 2 hard disks! Less high but wider than the FD1005, that differs of course by the 2 slots (which they also improved, because on the FD1005, the slot was scraping on the hard disk or here, this is no longer the case), the diodes showing the percentage of cloning , but also by the power button! On the FD1005, the power button is a switch of the same type as those that adorns your room to light your lamps, while on the FD2002, it is a push button, which allows not to extinguish it accidentally by bumping it for example… Offline cloning is done in the following way: the HDD to clone in the slot A, the other in slot B (its capacity must be necessarily greater than the hard disc in A). Pressing the button "Clone" during 3 sec and then re-pressing the button "clone" to be able to clone. You have to be fast enough for the 2nd support, I have repeat me several times. However, when pressing the button "clone", I noticed a defect: the non-slip pads are higher than on the FD1005, but have the same provision, i.e. the 2 front are close to the centre and 2 arrears are in each corner. On the FD1005, this posed no problem, but on the FD2002, this poses a problem of stability! Because the height, lightness and their disposal when you press the button for cloning, you have all the dock that looks when you press with a little force… Speed in cloning offline test: transfer of 172 gigas for one SSD to HDD. Everything is done in 57 min (files any kind, tested in actual condition ^^ Videos, documents, games, music, etc.), and this gives us a speed of 3,018 Gigas min or even 50.3 MB per second! Which isn't bad at all! 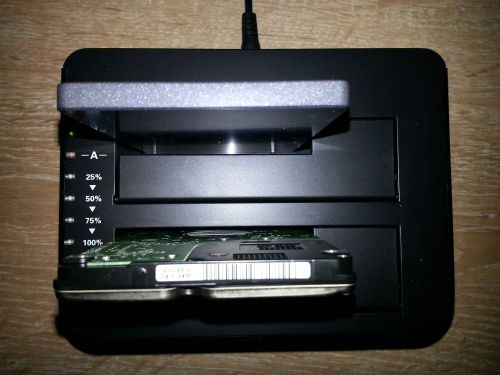 I would simply say that this double dock is just excellent! The FD1005 was already not bad and we can say that they have simply erased the defects but also added new features! Almost perfect! Only fault observed: at the level of the non-slip pads, it would have just enough to lower height or to 4 in each corner.   Product link: http://www.amazon.fr/gp/product/B00LM5N78E