What is a thermal imaging camera?

A thermal imaging camera can detect heat differences from one point to another. It captures infrared radiation and transcribes it as a temperature zone. Generally, you have a beautiful dark red for a very warm body and a green area for a colder body. Generally speaking, you can change these colors, but these are the most used colors I would say.   Beware, unlike the film you make in your head, a thermal imaging camera does not allow you to see a body that emits heat through a wall, a door or any other obstacle! Infrared radiation is simply blocked.

The difference between thermal and infrared camera

An infrared camera and a thermal imaging camera are not used in the same way. Although both types of cameras use infrared radiation emitted by a body or object, sensitivity differs between the two.

The infrared camera captures wavelengths in the order of the micron. It is mainly used in the dark and with additional lighting to film night scenes. For television or hunting for example… Infrared cameras usually give images in shades of white-grey, slightly pink/purple. Landscape in shades of grey taken by an infrared camera

While the thermal imaging camera captures wavelengths in the order of one-tenth of microns. Sometimes called heat waves, they are directly related to the temperature of the body or the object that produces them. As a result, it is used to measure the thermal emissions of a place and can detect temperature differences on an electrical installation, insulation defects on a building, etc. Like the infrared camera, thermal can also provide images at night, with better image quality and no additional lighting. The images are in several colors depending on the temperature: blue, green, yellow, red. Colors that can be changed generally. 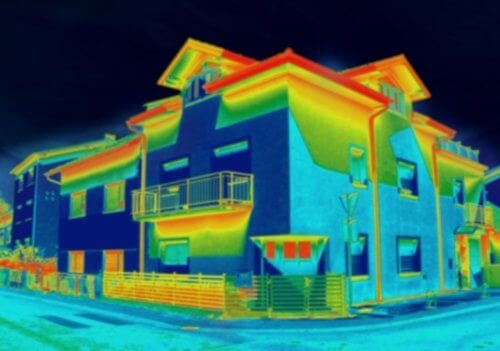 An important criterion is price. The HTI HT-102 costs a hundred euros. The best known like Flir or Seek range from about 250 euros to 500 euros… There is an Apple version, which is the HT-101 model.

The HTI HT-102 is very well packed, you have a big block of hard foam. In addition to the thermal sensor, you have a plastic transport box with the foam inside pre-cut to match the shape of the sensor. In addition, you also have a micro-usb/usb-c adapter. So it's perfect for transport, but also for compatibility with your smartphone. Even if the latter does not have a USB-C port, the adapter is there to solve the problem.

The HTI HT-102 is used with the "Thermal Viewer" app. The app allows several things:

When you read the comments on the Play Store, you notice that people complain about the discrepancy between normal vision and thermal vision when superimposed on both. This story seemed rather strange to me, because if the person or the people who made the application could overlay 2 images, I could not see why they could not integrate a function that could shift the images. Especially since if the application was installed once, it's still a glaring problem! Except that people have not quibbled enough to the application. After 2 min, I discovered that there is a hidden function that can solve this problem! Just click on HTI, and there you can change the overlay!

Another thermal image of a 3D print On this one, we notice the same details as the previous photo, but with a few more details:

Thermal image of a handprint In some films have seen sequences where thermal cameras indicate a person's footprints. Is the camera accurate enough to show that? I didn't test with my feet, but I put my hand on a sheet 1 sec, and then I took a picture. You can clearly see the shape of the hand!

Stick USB that heats up This image indicates that my USB stick heats up a lot (but it was no secret to me), but also the USB hub with a warmer area in the center, and as well as the cable that powers the usb hub!

Thermal image half hidden by a handkerchief This image is to prove that a simple handkerchief can block thermal radiation. then see a person behind a wall…

There's one flaw: if your smartphone is in automatic change mode of your screen position in landscape-portrait mode, if this feature activates, the app reacts as if you had disconnected the sensor and put it back on. Except for this defect, I find this thermal sensor very interesting and very useful. It certainly does not have the accuracy and resolution that sensors 3 to 5 times more expensive, but these measurements are relatively correct and accurate.   Link: https://fr.gearbest.com/testers—detectors/pp_009475122308.html?wid=1433363