Having in my possession a Samsung Galaxy S3, it is necessary that I protect it (although I think I am a fairly careful person, but never know, an accident quickly arrived!) To avoid breaking my head, so I threw my dismay on a pack that incorporated all the protections desired one… Pack. This protection Pack is of the brand Capdase, brand pretty well known in all that is shell and protective cover for Smartphone. This pack includes the following items: 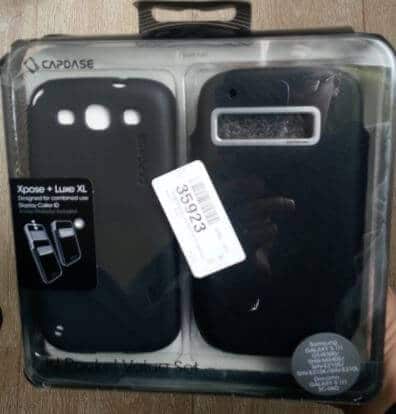 When we do not know the shields of Capdase screens, we still make a few fears! The packaging is made of soft plastic, so if the packaging folds, the protection also folds and is likely to leave traces of bending, and would be unusable. We all know that our dear products are badly treated, whether before, during or after their boxed! 2nd scare at the opening: the screen protector is pink! Very brief instructions for use: avoid bubbles. Ooookkk… This one is composed of 2 tabs, one that must be drawn before the application of the film and one after. Withdrawal of part 1: a first transparent protection is removed. Error or not? Don't want to have a pink screen protector! No choice, only the 2nd part that is Pink is sticky and the second tab does not detach. Too bad, collage despite everything! And Oh miracle, now it is possible to remove the second tab! And so this second protection was pink, the film is transparent, as clear as Crystal! And it is after removing this 2nd protection pink, that one is happy: the film is transparent, clear, slides well and especially ultra-thin! So thin that it would be difficult to remove it by scraping, it would need more sticky paper. Bubble side, it's OK, I managed to leave only 3 small, but this is due to the fact that it took me time to understand the operation of the installation of the film and that dust came to bang the inlay in the meantime! Cutting and covering level, the film covers the screen and the notification diode, does not protect the home button or the camera as well as the 2 sensors. This one does not completely cover the Samsung Galaxy S3, there are 3 to 4 mm of the 4 sides of the phone that are not protected by the protective film. And alas, the protective shell does not protect more than one mm this area.

So let's come to this protective shell: this one is black (in the black Pack), supple, smooth very pleasing to the touch and does not keep the trace of the fingers. This one is matte with the edges and buttons in gloss that it covers entirely. The cutting is very accurate for the camera, Flash, speaker, mic jack and micro-USB port. On the other hand, two half-circles are cut on the flat side, lower left (rear hull seen from the front). Another cutting, even stranger, is located at the level of the left corner: it is practically the whole left corner that is laid bare! (only the edge that is protected is left!) Design or function? If it's design, OK for the 2 half circles (and I think that's the case), but not at all OK to lose the protection of a corner especially as I find it ugly! I searched a little bit on the net if these holes had a reason to be there, in case the silicone would break the path to some wave emission/reception, but I found nothing. On the other hand, I found the reason why I started in the tests of materials: from what I could read, those who have "tested" Capdase shells did not even mention the fact that there was the left corner that was not protected, as if it was nothing more nor evil and usual to find hulls as well! Of course, the Smartphone would have to fall in a very special way on the edge of something, but the purpose of a protective shell is to protect and rarely control its fall! In short, except the left corner, it makes me look like a good protective shell. 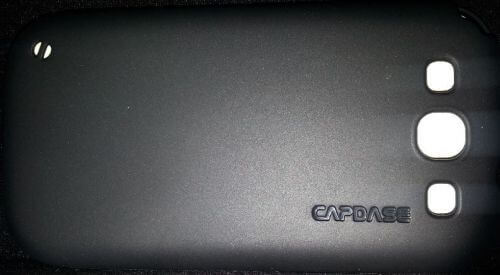 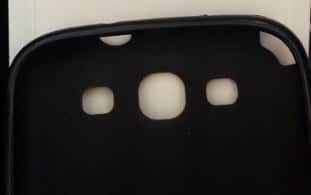 The protective cover for the SG3 is black outside with ground meat (in any case, it is as regular as when I make my meat chopped with a knife) or irregular gridlines if you prefer. Orange color inside. This one is composed of an aperture for the notification diode, the speaker and a window (unprotected) that allows you to see the identity of the person who calls you! The back also contains a small metal hook that allows you to attach a wrist strap. The cover is compatible with either Galaxy S3 with or without a protective shell! And the cuts are very precise, they fit perfectly, whether with or without protective shell. The 2 sides of the covers are glued to each other by a seam that is nickel, the whole is to see how well the wires are resistant to abrasion… On the other hand, when looking inside, we notice 2 padding Rails on the inner rear side. The question I am asking is what are they used for? Brake, buffer zone for SG3 with or without hull or any other function? Because even with hull, the 2 Rails always remain there, they are not flattened and as a result, it is a big entrance for the dust! 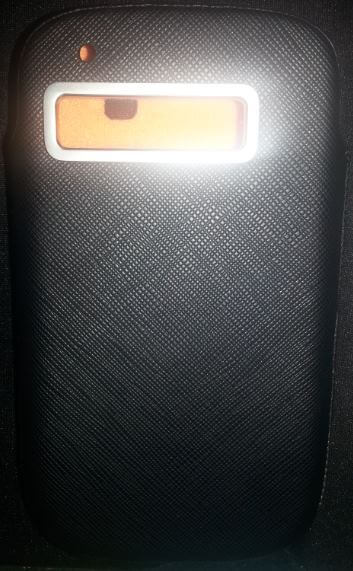 Simple gadget. Not tested because in plastic and at its simple sight, one sees directly that after 10-20 folding, this one will break. I do not hold it because it is a protection Pack, it is personally more a bonus than anything else.

Despite a few questions/quirks that remain unresolved (firm contacted to know more), this still remains a very good Pack to protect your Samsung Galaxy S3!