Time-lapse is a video effect interesting to observe slow phenomena or not in an accelerated manner. Whether the blooming of a flower or the moving clouds in the sky. There is an effect of time compression. To do this simply a camera that has built-in Time Lapse or a camera with an intervalometer. The principle being to take photos at regular time interval, then assemble them at 24 or 30 frames per second. If it is a picture per second, then was with a video of 30 frames per second, the time will be accelerated 30 X. It is easy to achieve with a digital SLR, for example, the good quality of images, often more than 16 mega pixel sensor and the ability to shoot in RAW permit, in the case of the time-lapse to have a professional result in 4K without investing in a camera to more 3000 euro for a normal film of similar quality to speed. However it is quite possible to use a Smartphone, a compact or a GoPro. Most often the time-lapse are made from a fixed viewpoint, but the effect can be interesting also to add a movement, which at the time of the result made illusion of a normal camera movement, while real movement is very slow (given that video is accelerating). To do this I wanted to try with a movement of rotation with the motorized panoramic head Sevenoak SK-EBH01.

First of all, the motorized panoramic head Sevenoak SK-EBH01 comes in a suitcase of storage with metal reinforcements. It is both aesthetic, protects rather good material, and brings a value added from a simple cardboard box or a carrying case fabric. The suitcase contains the panoramic head, AC charger and an instruction manual. 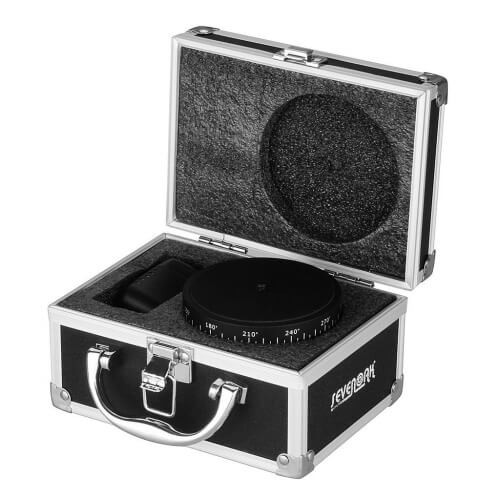 Head scenic it is metal and painted in black. the top running has a graduation of angle on the 360-degree increments of 5 degrees.

Motorized head has a step screw 1/4 "below and a screw 1/4" at the top, allowing him slide easily between a tripod and a camera or camera. 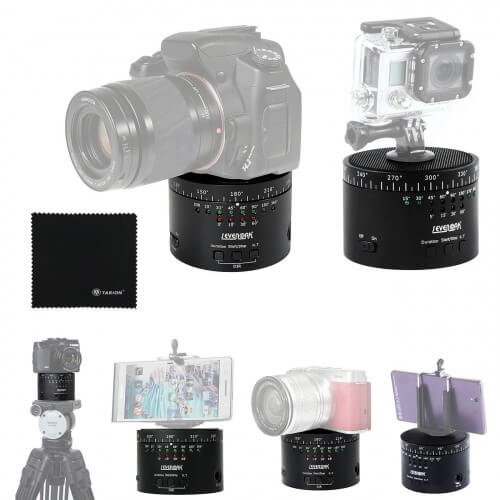 Usage is easy and intuitive, a button ON / OFF on the side of the head motor. A charging socket coupled to an LED, red in charging and green when charging is complete. At the front, a series of 3 buttons and LEDs. The left button (Duration) to adjust the angle of rotation, this angle is indicated by the corresponding green LEDs. The options are 15, 30, 45, 60, 90, 180 and 360 degrees. The right button (R.T.) allows to adjust the time of rotation, this time is indicated by the corresponding Red LEDs. The options are 5, 15, 30 and 60 minutes. Finally the media button allows to start and stop the rotation. There is a DIR named green LED to the direction which has two States, on or off indicating the direction clockwise or counterclockwise, to change this setting simply press simultaneously the buttons left and right. 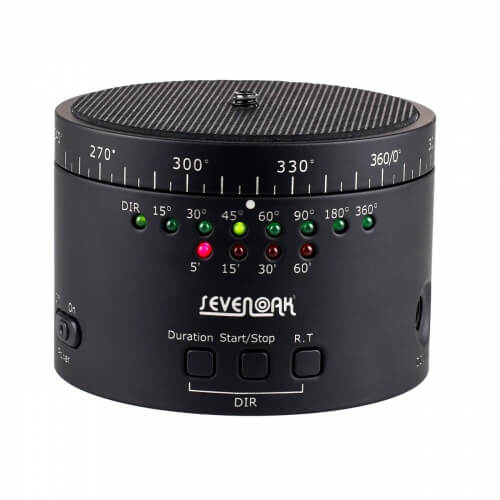 4 time and 6 proposed angles allow 24 different combinations. For the slower, 15 degrees in one hour, the rotation is 0.25 degrees per minute. The faster it 360 degrees in 5 minutes, the rotation is 72 degrees per minute. It is shame to not have pushed the flexibility further with either a small screen to select any value or a bluetooth module to indicate a setting from a phone for example. However, with 24 opportunities, there are already way to do many things. For each of these possibilities the plateau movement is fluid, without noise for the lower speeds and a very slight noise, barely audible at maximum speed (similar to a noise of the needles of a watch bracelet).

Here's a little montage made a few days ago by zero degrees on the roof of a building with wind and at times a bit of rain/snow. The motorized panoramic head Sevenoak SK-EBH01 well escaped. My camera in the State about 1 Kg, must be just to pay attention to the thong that she wraps not somewhere during the rotation, this venture to block the mechanism. 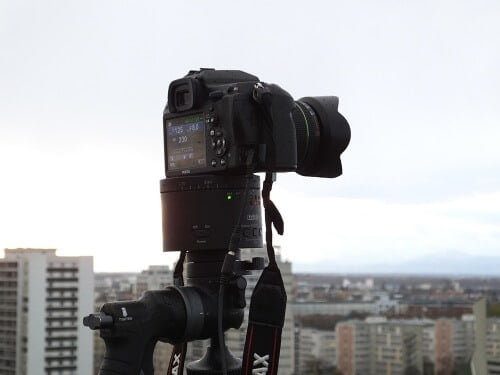 The motorized panoramic head Sevenoak SK-EBH01 is a type of rare product on the market and has a very good price quality ratio. Indeed it is not difficult to find head for much more expensive than the latter. It seems robust, has several features intuitive database and the movement is fluid. Its load capacity of 1.5 Kg is suitable for the majority of the cameras and cameras. More flexibility in the settings will have been well, however, is not a disability for let spoken ca creativity.   Link: in http://www.amazon.fr/gp/product/B00YIZ1ENU/