With the updated of the NFC by Apple with their iPhone 6 and Apple Pay, I decided me is also to test the NFC tags with my Samsung Galaxy S3, something I had not yet made. The NFC, although little known in Europe is well established in the several years high-end smartphones. For those who do not yet know what the NFC is, I advise you to read this article: HTTP://WWW.IDENTIVENFC.COM/FR/WHAT-IS-NFC so I got the Samsung NFC Tags named Tectile (s). The 1st thing to know, is that it is not because I have a Samsung Galaxy S3 I took Samsung tag feed. There are to date, as far as I know, that 2 major brands of mobile phones that have decided to market the NFC tags: Samsung and Sony. Tectiles for Xperia Smartags for Sony and Samsung. 5 stickers tags for Samsung and 4 tags key chains for the Smartags. More or less the same price. Design and practicality, I prefer those of Sony. Then why have taken those of Samsung? For several reasons: they are more advanced technologically, all compatible smartphones, have more memory and are also more documented. Strange as it may seem, it is difficult to find information about the tags you buy: size, type, memory available, etc…! But these are important data because the less memory, the less you can insert data and therefore make fewer orders! (http://forum.xda-developers.com/wiki/NFC_Tags) In addition, there are several versions of Tectile tags and Smartags tags, but little info has filtered between the different versions, which in the end you do not know what changes between the versions, and do not even know which version you buy because usually Sellers don't even know it themselves! The latest version of the Tectiles tags is to be compatible with all NFC tag readers including the Samsung Galaxy S4, which was not the case previously with version 1. To the Smartags, no info, you have the NT1 and NT2-the NT3… Apparently, the NT2 is the colors that change… to with respect to the passage of the NT2 NT3, mystery and ball of gum…

The test of the NFC Tectiles tags 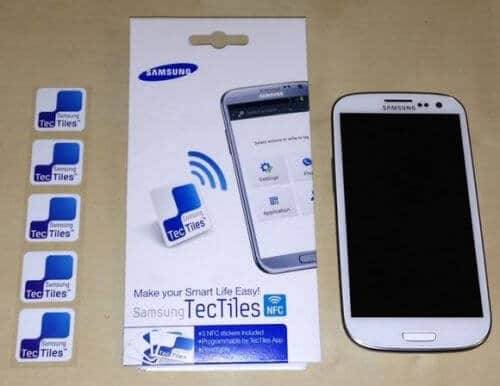 These are therefore 5 stickers that you can program with any application that allows editing of NFC tags. I tried them with just their dedicated application available on the Google Play: Https://play.google.com/store/apps/details?id=com.samsung.tectiles2&hl=fr_FR very easy to use: You create a task, you add or remove Actions that are separated into 4 large groups: settings, phone, Application, SNS (mobile networks). For parameters, you can now ask to change the wifi, bluetooth, change sound profile, brightness,… For the phone, you can: make a call, send sms, email, share a contact, display a memo, display a location, open a web page, set an alarm, set a self-timer, listen to music, play a video, display a picture, flash menu,… You can insert up to 888 bytes of control, and knowing that switch the WiFi (for example, if the WiFi is on, the passage of the tag allows to turn it off or inversemment) takes only 5 bytes, it leaves you margin for all your orders! The reading, writing or erasing of the tag data is done without any problem!

Easy to use, fast and efficient and a lot of options! In short, I advise to all those who are often the same tasks and who want to make life easier! Passage in airplane mode at night? Just move the smartphone on the tag and's done it! Trigger the GPS and wifi in the car? A tag with the command in the car and it's good! Etc… Too bad that the tags are available that decals, tags in keychain as Sony would have been interesting in my humble opinion. Product Link: http://www.mobilefun.fr/39522-5-tags-nfc-tectile-programmables-samsung-galaxy-s4.htm for info, the NFC tag reader is located at the battery level of the Samsung Galaxy S3, so if you ever changed or change the battery and You're interested in NFC, think about it! ;-) Generally, unofficial batteries do not have NFC. And saw that I was often asked if it was normal that the NFC tags do not work when the screen is off, the answer is Yes, it is a security issue and it is the case in all Android. But there is a way to override this block and use the NFC tags even if the screen is off! The trick is to rooter your smartphone, to install "Xposed" and the module "enables the NFC locked / screen off" and through this module, you don't even need to switch on your screen to activate an NFC tag, make your life even easier!