I know for you, but for me, on my desktop, it's just the brothel (anyway, I said that it was an "arranged brothel" I like to designate my mess, that I find still!: p): between my pc, different cables, documents, tools, etc… It remains for me very little room! Not even enough room to put my smartpohne quietly! I have to lay it on a stack of paper, which I do not like because it happens to me quite often to pick up some papers in this stack. Of course, my smartphone, I could put it anywhere, but it would not actually be safe, or I wouldn't direct display on him (I put silent generally, it prevents me from having a heart attack, especially when I am focused). Docks / stands for smartphone, it though, it reloads, it is more or less secure, good visual, etc… but the trouble is that it takes up space on the desktop! Yet it is precisely what I'm missing! To compensate for this problem, I did some research and I managed to dig up a little special media, it uses the principle of a coil of FuseChicken but as a support. I had also already used this idea, but unfortunately, the cable was not long enough nor sufficiently clever to support the smartphone in all positions. 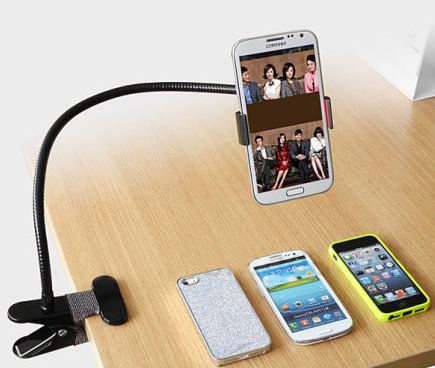 Therefore a Universal Mount consisting of pliers of base support, a flexible arm and a pair of pliers to hold the smartphone. Thanks to the flexible arm and clamp, this support does not 1 cm square space on your desk! Only a little place, a few centimetres are enough on the side of your desktop, the smartphone being height, which has the advantage that you can put stack on your line of vision. Moreover, it makes me think of an object that some manufacturers are leaving and that I find ridiculous: keyboards gaming with support for smartphones… The idea is good, but thinking about it a bit, in practice… Who says gaming keyboard, said gamer… When you play, you, you look at your keyboard all the time? To write, Yes, to play, not! Video game, using most of the time than a few keys: Z, Q, S, D and directional arrows. The other keys are generally shortcuts, less important… In short, you have your little fingers on important keys, no need to watch! Your keyboard is more closer to you than your screen, also, no? Of course, it depends on the game, but generally, if you have a second of inattention, you die in the game and you lost. However if you really need on your smartphone for the game, if you put it with your keyboard, as usual you never look at, and this one is much closer to you than the screen, you pick up your eyes off the screen, and hop, you may die in the game! While with this support, no need to look down, you just put it to the same height as your screen, so, you don't lose to view your screen! And, it is changeable according to your wish! In short, can be used in almost any situation: at the office, at home, in games, in bed, in the kitchen, etc… The clamp to keep the smartphone can be opened up to 9.7 cm and is rotatable! For reference, the phablette Galaxy Note 4 (5.7 inches) is "only" 7.9 cm long! On the other hand, a 7-inch tablet is approximately 10.8 cm. It includes rubber at the place or she maintains the smartphone to do not damage. 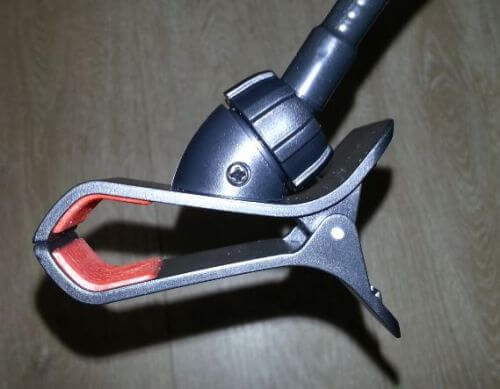 The flexible arm is made of steel and is 68 cm. The maximum curvature is about 8 cm. 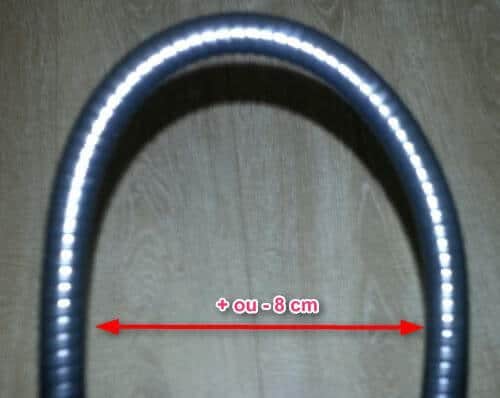 The clamp that attaches to the office is covered with a thick layer of foam and "arms" are covered with an elastic band (Silver reflections that we see are just the bright filament they inserted to design such rating mesh).

Here lies the most big flaw of this desk stand: the clamp in the office. This clip is just way too hard! One-handed, impossible to open more of a few millimeters. Even with 2 hands, find it me impossible to open more than 3 cm! I'm not a he-man, but still! It's just amazing the strength to open it! As the clamp which sets the smartphone is like classic, neither too easy nor too difficult, is impeccable, but here, it's just abused! In fact, if you look the picture, you see the 2 layers of foams, which are no longer in their correct location, and this is due to the force of the spring that is so strong (and it's on the hard foam), that although the foams have been set by the neck the strong, that they have moved to place! And I checked the best I could, this foam is still well attached, so it's even not glue that is missing, is that during the "construction", MOSS has moved due to too strong clamps closing and this despite the fact that the foam is surrounded by a good 5 millimetres of height of metal! This closing force is both:

Its weight, that it is primarily steel, made even 432g.   Product link: http://www.mobilefun.fr/42952-support-bureau-universel-systeme-clip-pour-smartphones.htm