I was recently asked what I thought of the concept of Keychain Keysmart, given that my own keys cause me some problems, so I decided to get a copy to see what it really is. The problems with my keys? Holes in the pockets (especially the more annoying ca!) and jingle while walking. How can the Keysmart adjust this? Simply keeping the key in an optimum way while making them accessible.

The Keysmart project appeared on the famous crowdfunding site Kickstarter and received nearly 330,000 dollars in 40 days on the requested 6000, IE if there a success! https://www.kickstarter.com/projects/2065501355/smartkey-free-your-Pocket instead of create a box storage for our key, which would have been little optimal as it would take more space that provided, they had the good idea to create a kind of Alumium S: in this way, the "ends" of keys don't roam around and make more holes in your pockets! And because everything is compacted, more noise!

The concept of Keysmart, keeps its promises?

Well, the answer is… for me, a big Yes! Very easy to use, simply bring your keys and a piece of 1, 2 or 5 cents (or your nails if you) (the biggest pieces also work to turn the screw, but using only one edge). You need to balance everything between keys, washers and door-ring, screw back and voila! Ultra simple and effective! Believe me, in your pocket, it's a real pleasure! You no longer have this mass of metal which have everywhere! Everything is compacted, a lighter hair according to the rings (for all rule them) you had. No worries of storage, be it large or small keys, thick or not, with big hole or not, and no problem to get out his keys, they slide relatively well without for as much too slide to wander in all directions! The basic version allows you to insert up to 4 keys. You have some expansion packs allowing you to increase the number of key that the Keysmart can support (up to 22 key for now), packs with USB drive (8, 16 or 32 gigas, for now), bottle opener, quick, colorful blank key, etc… Regarding the USB key, no worries to do you at the level of the quality of these, what are key USB 2.0 Classic brand, and they provide you a rubber washer for the key is not swinging. Only worries I can say at this level here, is that if you insert the USB key with your key, more your Keysmart will include key, it will pose a concern: the weight! In the basic version with 4 keys, no worries, but in versions with expansion pack weight cantilever may be difficult as well to the USB stick as well as the USB port. In this case, it is rather advise to attach with a ring at the door-ring included in the Keysmart.

An excellent Keychain which is much nicer than the keychain with classic rings! Simple, compact and design. Possibility to make it even bigger and useful thanks accessories packs. The concept is very recent, but makes me think to Swiss knives, and I think that if the Keysmart continues to evolve, we could quickly end up with a model between Keysmart and merged Swiss army knife, perhaps called "keychain American"? :-D   You can find all models and accessories on the official website of Keysmart France: http://www.keysmart.fr/ as it is the holiday of the year, I offer you the opportunity to win the key-smart Keysmart 2.0 with accessories ! 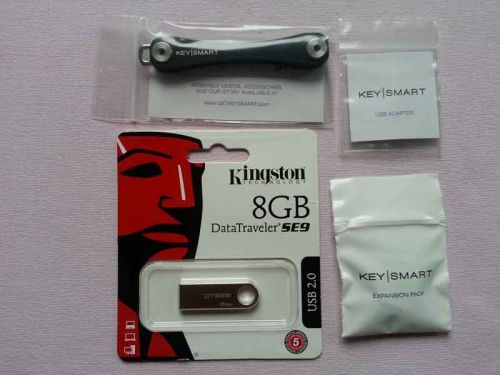 Nothing more simple to participate, you simply just leave a comment to at least 3 words below this article! Contest on December 17 to December 31, 23 h 59 and 59 sec. Draw the days following the end of the contest. No geographical limit participation. The winner will be notified directly by email.