Although having a Holster for my HTC Evo 3D smartphone, I decided to try to hit with a shell. The already installed screen protector, it remained me to choose my hull.

In the protections at the level of the shells, you have 2 kinds:

Among the rigid, you often have a 2nd party that it is rubber, and which peaked between the smartphone and the rigid hull.

Knowing this, I preferred a semi-rigid shell, which is in one piece and allows me to remove it easily.

The semi-rigid, flexible shell that I chose, is the Incipio NGP for HTC Evo 3D.

There are a lot of shells for smartphones and it is rather hard to find which suits you best!

You have the choice of criterion:

Why I chose the Incipio NGP rather than another? For texture (mat), its flexibility and effectiveness.

Its effectiveness, I have ofcourse not tested it before you buy it, but on the internet can find videos "Drop test" of a few shells Incipio NGP.  The videos "drop test" are videos that show a loose Smartphone by land, with protection, to verify if the hull is effective or not. Some videos are also funny, rather than release a smartphone as if he slipped hands as can happen, they dangle the mobile against a wall… and are surprised that the smartphone is broken despite the protection, which at the base is not made for it!

I have not found a drop test to the HTC EVO 3D, but for other models, Yes, and the conclusions were that the hulls of that mark were effective. But it's mainly another detail that made me look for the shell rather than another: the protection of cameras!

The HTC Evo 3D has 2 cameras on the back which emerge 2-3 mm from the back panel. What makes that, that is cameras that collect a part of the kicks and claws with the bottom of the smartphone if you place it on his face back.

However, often the hulls for the Evo 3D are just a hole for the cameras! What is in reality, rather than the 3D EVO is based in part on the bottom of the appliance without hull, it rests completely flat and on the whole of the surface of the cameras touchele support on which smartphone is placed, because usually the shell thickness = thickness of the overcoming of the cameras! Basically, they are not at all protected and on the contrary, are even more vulnerable!

Of course, some shells take into account this, and make the thicker shells, but it is more difficult to know from a single photo or even if you hold in your hands (without inserted smartphone).

Therefore the Incipio NGP hull covers cameras and therefore protects actually for cameras, and it, it is sign that they were thinking when they created the hull, they were not just cut the hull the shape and size of the smartphone!

Incipio NGP for HTC Evo 3D, this is: 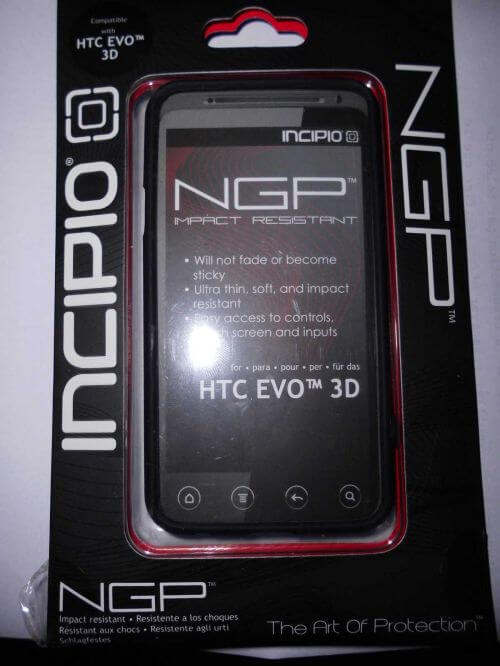 My opinion on this accessory:

Very pleasant to the touch, it does not stick, or slipping hands! Very nice design, it will not bend despite the strength that we can put to fold. 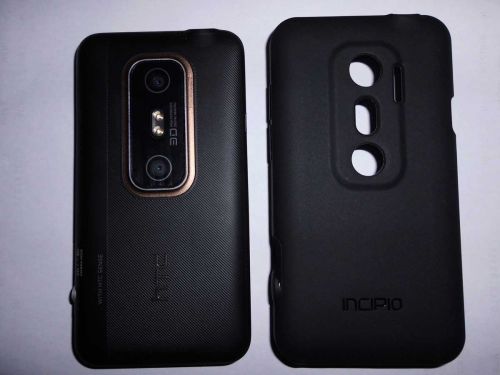 Rear side of the HTC Evo 3D and shell

It protects perfectly the integer unit, camera and monitor are included. The hull "raises" the screen about 2 mm as shown in this picture:

The shutter of the camera button is very well protected and usable. All buttons are protected and easily access, no need to force to increase or decrease the sound of the smartphone, or to turn it off! Space for the mini-USB, microphone, speaker for the 3.5 jack and for the 2D – 3D switch rear!

Short, the shell is completely suitable for the htc evo 3d, we note that hull has really been studied for it, that there was research and tests!

The only concern, it is at the level of the withdrawal of the hull, it is really difficult! I need to fight for at least 5 minutes in order to remove the hull, while the rear side of the smartphone gets stuck! Is very annoying, but on the other hand, the fact that it is difficult to remove the hull is a sign of good protection, because in case of fall, the hull will not come off! Moreover, on drop test videos, one often sees protection separates from the smartphone after touching the ground, and it, it is proof that the hull does not protect the appliance, because an object (hard) dropped at least 20 cm of the soil is generally at least a second bond! Or if the protection separates the 1 bond, the device is no longer protected for the second jump, which is also fatal to the smartphone!

Incipio NGP has really been designed like a second skin for the htc evo 3D, it protects perfectly the shock, will not separate during a fall and access to the various buttons no problem despite protection! The only black point is at the level of the removal of the hull, which is much too hard. I do advise so not to those who often need to change the battery, SIM card or micro SD card!

The tested hull is specific to the htc evo 3D, but I think that you can trust the brand: evo 3D is not a very well known smartphone of the general public, so if Incipio has done research on it, it has no reasons so that they do not for other smartphones they offer! You can find other shells for other HTC, as for example the last released, the One on Mobilefun.