Saw the price of smartphones, I think that one of the important stuff, is to invest a little in protecting it! In any case, if you intend to keep it as long as possible in good condition!

One of the protections possible, screen protectors, which are (yet happy!) transparent plastic films that sticks on top your screen.

Some include different types in a single sheet.

At the level of the brands, you a very known as precisely the Martin Fields that I purchased for my HTC Evo 3D, the Invisible Shields, MFX, etc…

Like any object, you have the lower range, mid range and high end. The protections of low range screens are easily recognizable by their price, you usually a dozen per pack and for a wrist of euros. Personally, I was never bought or tested… But if they provide by 10-20, do you expect to change them often and that your screen will take a scratch despite the protection… not to mention the fact that smartphone screens, there are several kinds (capacitive, resistive, LCD, OLED, etc…), so not say that your screen protector fits to your screen! There is also the question of aesthetics, cutting, sensitivity, collage/take-off, etc…

In short, I prefer pay once more for good quality, than to pay 10 times stuff cheaper which in the end may arrive at the same price!

The screen protector Martin Fields, in the same way of the Invisible Shield, are regarded as part of top range, and given the price, it is noticeable immediately: count about 15 euros for a single sheet… Remains to show the quality level if it's worth to…

The peculiarity of the Martin Fields for the HTC Evo 3D screen protector:

It goes from either that find it me impossible to test everything! Certain characteristics are tested in the long run…

The items that I will test are: aesthetics, installation, improved visibility, texture (slides) and anti-glare. 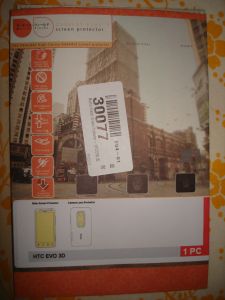 A piece… but composed of 2 protections! Screen + camera 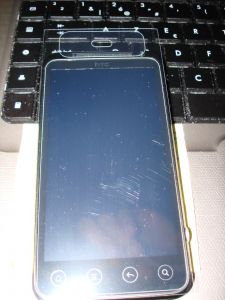 2 protections superimposed on the Htc Evo 3D before gluing.

Aesthetically, the cutting is good enough, they leave you some room to not have too much difficulty in the installation of protection. This margin, from what I observed, is less than 0.5 mm. What makes that actually directly note the rounded edges that are shorter, and if he was well placed from the top, we notice that the bottom is also slightly shorter. On the other hand, the quoted side, it is hardly if it detects the edges of the protective film! Basically, so we can see the movie if you look at the top and bottom of the device, but not on the sides. With a shell or a cover, it is guaranteed to be invisible! 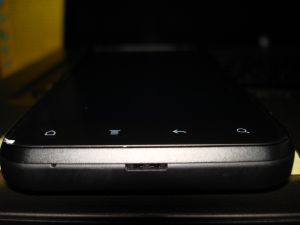 Before the establishment of the screen protector 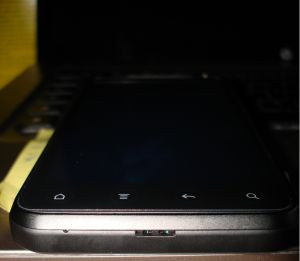 After establishment of the screen protector

Regarding the installation, it is supposed to be easy. You have an instruction manual in English that tells you that you must use paper sticky to remove dust, etc… You also have links to videos that show you how to operate, as well for the installation to take-off.

Personally, I decided not to follow their instructions and do it my way! If it's easy, no need to watch a video, and then it is just a screen protector, it is not mount a machine!

Before installing the screen on the screen protector, I therefore cleaned it with an alcohol eyeglass wipe. Then, I took off the top of the protection, on the screen, and then off the rest and pasted the rest.

Result? In 10 seconds, it was asked, no bubbles, no dust! In short, it was really easy as pie, I've known worse like collage!

Clear! I perceived no difference before and after the screen protector! Perfect transparency!

On the other hand, it is supposed to improve the visibility of that I understood, and there I saw no improvement…

At the level of skiing and the touch, this is perfect! With or without screen protector, you see no difference! The touch is always as accurate and the glides as smooth!

In the limit, the snow is even better! As in the description of the product on Mobilefun, they did not specify that the protection also decreased fingerprints! Indeed, the screen protector reduces fingerprints (but does not disappear) and makes the screen less fatty. Original screen almost directly kept track of the fingers in 1 or 2 slides, while the protection disappear paths little by little, a little as if it was the fogging.

This way of operating allows protection to reduce traces and that they are not concentrated in 1 area, and that it is felt at the level of skiing!

For the anti-reflective, I have almost not noticed improvement… But what I know, there is currently no really effective solution against reflections…

This note immediately that it is of good quality! Well I tried to do a few claws, but I failed. (But I did force either, nor used glass paper…) The protection holds well, cutting is quite good, easy to apply, almost invisible protection, transparency clear as water from rock slides and tactile excellent, and reduces fingerprints. Side anti-reflective, frankly visible improvement… And I appreciate the fact that they thought to insert a protective film for the camera.

Score of 17/20, if you're willing to put the price, I advise you the Martin Fields protections to protect the screen of your smartphone!

The article can be purchased on: http://www.mobilefun.fr/30077-protection-dcran-htc-evo-3d-martin-fields.htm

You can find other protections of screens for smartphones on Mobilefun.fr online shop